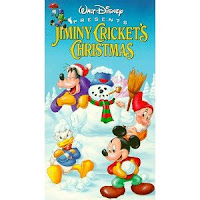 To today's viewers, most of this plays like an extended commercial for Disney DVDs.  It's easy to forget that most of the movies and clips featured wouldn't have been available for sale when this aired.  For a number of viewers, this would have served as an introduction to characters and movies they wouldn't see for years.  Now, the clips feel bizarre and esoteric.  Scenes from Pinocchio, Snow White, and Cinderella are included, despite the fact there's no discernible connection to the holidays or even winter.

The shorts are far more interesting.  I particularly enjoyed "Donald's Snow Fight," which portrays an escalating snowball fight between Donald and his nephews, culminating with Donald shouting "I will exterminate you," only to watch them decisively end the conflict.

This also contains "Once Upon a Wintertime," a sweet story told with some beautiful animation.

There were also some decent shorts from the thirties.  Apparently, "The Night Before Christmas" has been cut down over time to remove jokes that targeted minorities.  They missed at least one on the version I saw.  Even with this cringe-worthy reminder of the era the short was from, it's still worth seeing.

I'm not sure I can say the same for the special as a whole.  You're far better off tracking the individual shorts down individually than trying to sit through the whole thing.  Alternatively, if you're watching on video or DVD, be sure you have a remote handy to fast-forward through the clips you've seen.  Unless you're a huge fan of animation, you might also want to skip "The Clock Watcher," a Donald short which gets tedious pretty quickly (don't listen to Lindsay - I think this experiment is getting to her).

Your best bet for this is to search online.  Lindsay tracked down a few segments for you in her review, so that's a good place to start.  There was a VHS version called Jiminy Cricket's Christmas, but there's no way it's worth anywhere near what it's going for.
80's Erin Snyder Special