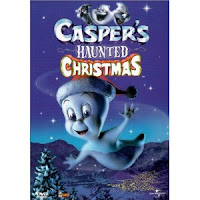 Oh. I feel quite unpleasant now.  This is one of the worst pieces of utter tripe that I've seen in a long time.

First off, the animation is awful.  The movie is full of creepy CG people who just look hideous.  The ghostly effect isn't terrible, but everything is animated poorly.

The plot is utterly arbitrary.  At the beginning it seems that Casper's uncles (aka The Ghostly Trio) are about to get in trouble for scaring a parking lot full of people... but wait, then Casper's in trouble for not scaring people?  Make up your mind. The “plot,” so to speak, is completely imposed upon the characters with utterly no rhyme or reason.

They are sent to “Kriss, Massachusetts.” Shoot me now.

Then we meet the rest of the characters: a family in which the parents are completely terrifying and utterly certifiable in their obsession with all things Christmas.  I kept hoping they would die horribly.  They have a daughter who starts out okay, at least she hates them.  But of course she doesn't really hate them and secretly likes some part of Christmas.  When that was revealed I started yelling at the screen, because they had broken my last hope, that the little girl would become some sort of patron of Halloween and they would all brush off all that Christmas crap and move on.  But no.  This movie had no redeeming value.

Which reminds me, why is Casper such a whiny little baby?  I hate him and want him to be punished for being a terrible ghost.

Plus the writing is terrible, the jokes are painfully unfunny, the whole stupid thing is slow as frozen molasses, and the music makes me want to claw my ears off.

There's a completely screwed up dream sequence in which Casper and his little human girlfriend (EWWWW) appear to be trapped inside a Lisa Frank Trapper Keeper.  Whales, Fireworks, and Rainbows, I kid you not.

The conclusion is just stupid ex machina, it comes out of nowhere, makes no sense and it broke anything amusing about any of the characters.  This movie really needs a giant warning sticker: DO NOT WATCH!

It's so much more horrible than you're thinking.  Trust me.  It's so bad.  So bad.  Don't even think about it.  I need to scrub my brain out now.

If you insist on subjecting yourself to torture, this came on the New Christmas Classics

I saved the worst for last: I got to the end, sat through the cringe-worthy exit music, and at the end of the credits saw.... No!  Mainframe, animators of my beloved Reboot and Beast Machines!  I know you've made a lot of crap, but this?  How could you do this to me!  I TRUSTED YOU!
00's CG Comedy Crime Against Humanity Fantasy Lindsay Movie