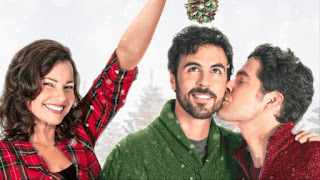 This year saw a seismic shift in Christmas romantic comedies, which had been almost universally heteronormative (the possible exception being Carol, assuming you're willing to use an incredibly forgiving definition of "Christmas movie" and the classic definition of "comedy"). Gay characters have certainly appeared in other Christmas rom-coms, but until 2020, we didn't really see them presented as romantic leads. Depending on how you want to define "Christmas rom-com," this is either the second or third such new movie we've seen, and there's at least one more we didn't get to.
That's obviously a great step, though I feel like the impact is undercut by how absurdly late it is. Sitcoms were willing to feature gay characters back in the '90s. By now, you can find representation in cartoon shows. Movies, both driven by big studios and made-for-TV, are behind the times. Still, it's nice to see them taking those first steps.
The Christmas Setup would have felt revolutionary a decade ago. It still deserves credit for being the first Lifetime Christmas romantic comedy built around a same-sex couple, but at the same time, it's a reminder it shouldn't have taken this long.
(Side note in the absurdly unlikely chance any producers are reading this: fund trans stories by trans creators now to maximize the amount of credit you receive and to avoiding looking regressive in the future!)
So, with all that context, how is the movie?
That's a deceptively complex question, because - at least in my view - that context is unusually significant to the movie itself. The narrative of Christmas Setup has its own themes I'll get to in a moment, but in a larger sense, this movie is about its own existence. It was made so there'd be a gay romantic comedy that's otherwise completely generic. Unlike Happiest Season (which, again, is a goddamn masterpiece), The Christmas Setup doesn't transcend the genre or even attempt to. It's simply a Lifetime rom-com where the leads are gay men rather than a heterosexual couple. And honestly, that may be enough, at least for audiences who have been starved of representation.
If you spend any time online, you're probably aware there was a backlash against Happiest Season over its decision to portray the central relationship in a way that was both complex and morally difficult. While the movie received positive reviews from critics and some of its target audience, it certainly wasn't universally loved.

At the risk of generalizing the criticism, I think a lot of it came from people upset they were getting something more nuanced than the straight Christmas romantic comedies they were used to. Or, to put it another way, Happiest Season was better than advertised, but not everyone wanted that. A lot of people streamed it wanting a traditional, generic rom-com where one lead's gender was flipped.
For better or worse, that's The Christmas Setup in a nutshell. The protagonist is Hugo, a New York City lawyer who returns to his small town of [checks notes] Milwaukee, Wisconsin, for the holidays. He brings his roommate, Madelyn, with him, since she'd otherwise be alone. He quickly reconnects with Patrick, his high school crush who'd gone on to develop a popular app that tells the future.
No, really, the thing the app does is predict the future with uncanny accuracy. It predicts the main character's food preferences, the precise time the Northern Lights will be visible, and... oddly, nothing else. There's a magical, future-predicting app that serves no plot purpose. But that means Patrick is retired and presumably wealthy, which also doesn't really influence the plot.
There's one brief scene in which Patrick assumes Hugo and Madelyn are married, but this is mercifully resolved almost immediately (the scene in question is painful, though). Pretty soon, Hugo and Patrick are falling in love, while Hugo's mom helps push them along. Eventually Hugo's brother, who looks like Chris Evans and John Cena had a child, shows up, so Madelyn gets a side romance. Whatever.
Also, the historic local train station is in danger of being torn down, and everyone's powerless to stop it, but I guess no one thought to hire a lawyer, because it takes Hugo all of fifteen minutes to resolve. And along the way, we learn the man who'd owned that station and sort of built the town/neighborhood had been gay.
Since two acts don't make a movie, there's also the requisite complication, here in the form of Hugo finally being offered a partnership with his law firm that would require him to move to England. The movie ends with him deciding to turn it down and move back to Milwaukee to be with the man he's been dating for a couple days.
Thematically, the movie keeps returning to fate, and more specifically to those who are attempting to control or direct it: Hugo when he delivers an ultimatum to his boss, his mom through her good-natured meddling, Patrick through his absurdly powerful and underutilized magic app, the late train station owner who created an environment where a diverse community could thrive... all variations on a theme. And that adds up to... nothing? Fate keeps coming up in relatively innovative ways (at least innovative for a made-for-TV movie), but there was no real message or statement about it, unless I missed something. It didn't seem to be consistently good or bad to shape your or other people's fates: it just came up a lot.
The cast was solid. Drescher was a good choice for the mother (and in case you're wondering, they do address her accent). They went with an actual couple for the leads, which absolutely paid off (actual chemistry in a rom-com - take note, studios). The dialogue wasn't exceptionally good, but I chuckled a handful of times.
So... it's fine, I guess.
Look, here's where everything gets tough, but the quality of this movie is subjective. Okay, quality is always kind of subjective, but this time it's really subjective.
I've seen a lot of made-for-TV romcoms, and I don't think any of them rise to the level of good. And this is no exception: it's as formulaic as the rest. In some ways, even more so - the script is about as generic as this subgenre gets, and it's a subgenre known for being generic.
But that's kind of the point, isn't it? Like I said at the start, this exists so one of these can be about a gay couple. And presumably, it'll have more company soon: Lifetime, Hallmark, Hulu, Netflix, and the rest will see you can release one of these without whatever bullshit catastrophe they envisioned (Letters! Boycotts! Peasants with pitchforks!) occurring, so they'll almost certainly make more.
And, for what it's worth, this is somewhat better than most of its peers. Not by a lot, but you kind of felt like the people working on The Christmas Setup were actually trying. And, at least in my experience, that's not always the case.
Whether you should see this or not should be pretty obvious. Do you like Lifetime romantic Christmas comedies? If so, sure, give this a shot - it's a solid entry, relative to what you typically get. Everyone else is probably better off skipping this, though. Groundbreaking or not, it's still just a Lifetime Christmas movie.
2020 Comedy Erin Snyder Movie Romance