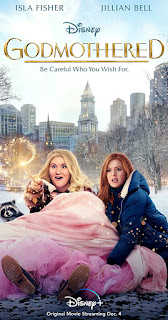 For the past thirteen years, more or less every Disney fairytale has started with the same premise: deconstruct and subvert tropes from "classic" Disney fairytales in a way that's progressive enough to deflect criticism but not so progressive that it threatens the bottom line. This formula was established by Enchanted, which I'd argue remains the high-water mark in terms of actually carrying through on that promise.

Godmothered, a direct-to-streaming fantasy/Christmas movie that just premiered on Disney+, is easily the most overt ripoff of Enchanted I've seen to date. The twist is instead of focusing on a princess, the main character is a fairy godmother-in-training trying to help a woman find her "happily ever after." And the theme of the movie is the concept of the happy ending is broken, so fairy godmothers should try to help people be happy, instead of attempting to morph that into a preconceived princess narrative. Note this moral is specifically focused on fairy godmothers, so its applicability may be limited.

This thing... look, it's an absolute mess. In a moment I'll do my best to synopsize the plot, but I'll tell you right now, I'm going to fail. This feels like it was written by a committee who wedged a half-dozen ideas into a bloated script, then some other executive ran in at the last minute and demanded it be set at Christmas for some reason.

Seriously, the point of this blog has more or less evolved into examining the relationship between Christmas and media, and I'm going to tell you right off the bat I'm not going to have a lot of insight here. The holiday... stuff... adds nothing to the story and actually detracts from the good stuff.

Oh, yeah - I forgot to mention. There actually is good stuff. One (maybe even one and a half) of the movies simultaneously playing out here is kind of good. Pity it's wrecked by all the rest.

The story mostly focuses on Eleanor, a fairy from "The Motherland," a pun they should have cut along with literally the entire subplot set there. The Motherland is basically Hogwarts for fairies training to be godmothers, and Eleanor is the least promising student. Making matters even less interesting, the school is about to be shut down because no one believes in any of this garbage anyway. The headmistress is of course deeply committed to a set of steps for godmothers to follow, which basically mirror the win conditions from Cinderella.

Eleanor finds a letter from a ten-year-old girl named Mackenzie asking for help. She travels in secret to the real world only to discover Mackenzie is grown up and raising two daughters on her own. She actually had a "happily ever after," minus the "ever," since her husband died in a car crash a few years earlier.

The majority of the movie is spent following Eleanor and Mackenzie as they form a friendship despite the myriad complications Eleanor's unwelcome meddling causes. Oh, and in the end, Eleanor actually helps Mackenzie's older daughter, who needed someone to believe in her. That subplot/twist is fairly well handled, save for the fact we're given no time with said daughter that isn't devoted to this single issue. Mackenzie and Eleanor are the main characters, but Eleanor's relationship with the daughter is what allows everyone to learn and grow. And save the fairy school, since she convinces the headmistress to change her outlook and that fixes everything, I guess.

And that's not even getting into the narration, which should have been cut entirely.

Despite this, the movie isn't a total loss. The comedy is inconsistent, but when it works, it actually is funny. Sure, a lot of the best jokes feel like they're lifted from Enchanted, but that's a good movie to steal from.

In addition, there's some good set-up and payoff around the daughter. I'm not saying this is top-notch filmmaking, but her storyline felt competently resolved, which is more than I can say for the majority of this film.

I will take a moment to tip my hat to the writers for resolving a potential romantic issue by implying a friends-with-benefits situation (albeit it in G-friendly innuendo). We've seen Disney movies "subvert" traditional love story narratives in a lot of ways over the past decade, but that's definitely a new one for the House of Mouse.

This thing isn't entirely awful, but the structure just doesn't hold together. It feels unfinished, and, in fact, it quite literally was. The epilogue is animated because they couldn't do reshoots due to the pandemic.

And again, there's the Christmas thing. I'm not sure if someone thought the backdrop would play well with the fairy godmothers (it doesn't) or if maybe it would get added annual attention as a holiday classic (good luck with that), but it's just bizarre. The holidays become a weird distraction from what should be an interesting fantasy element.

Overall, this isn't worth watching if you can avoid it. But if you've got kids in the target demographic, take some consolation it's not entirely painful to sit through.