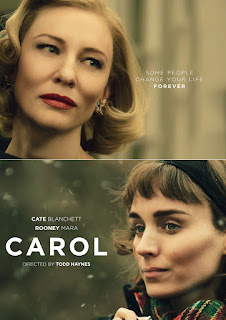 Erin decided we should watch this based purely on the Santa hat in the trailer. And sure enough, it fits our rubric for a Christmas movie.

Carol is a romance that takes place at Christmas, and over 50% of the movie’s run-time takes place directly before or after the holiday.

It stars Cate Blanchett as Carol and Rooney Mara as Terese. After a chance meeting in a department store (Carol is shopping, Terese is a clerk) the two become inseparable, causing strife with Terese’s lukewarm fiance and risking Carol’s custody arrangement with her ex-husband. They eventually travel cross-country together in an attempt to run from their troubles for a while.

The movie is adapted from Patricia Highsmith’s novel The Price of Salt, which she published under a pseudonym in 1952, when material about gay characters was often subject to obscenity laws. The plot elements are inspired by the real experiences of Highsmith and friends of hers, struggling with their sexuality in a culture that was entirely against them.

Let’s talk a bit more about Christmas. The movie is steeped in old-fashioned color palettes, which works out to extreme amounts of red and green.

Carol’s color is red. Bright, sensual, holiday red, but she’s not the only source of the color. Red clothing, red nails, red lipstick, red stripes on Terese’ hat, red chairs, red Santa hats combined with green light, Terese’s green sweater, green walls in Terese’s apartment, green upholstery, green olives in the drinks, green Christmas trees, gray-green automobile… When Carol tries to act against her desires late in the movie, her color palette shifts to black and white. The cinematography is not subtle - characters are often framed or boxed away from others.

Other holiday elements: preparing for Christmas takes up quite a bit of the characters’ time, and who Carol’s daughter will spend the holiday with is a contentious issue. Both Carol and Terese first prove their understanding and affection for each other with well-chosen gifts, before any confessional words are spoken.

It’s a well-made film with exceptional performances, but it’s kind of slow, so your enjoyment may vary. For example, I liked the way emotional connection and obsession were conveyed in long glances, careful lighting, and beautiful cinematography, but Erin found it a little dull. Even I wouldn’t run out and watch it again, but I’m happy to have seen it.