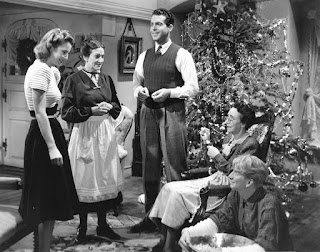 Remember the Night is the third film written by Preston Sturges we've looked at here and, in my humble opinion, the least interesting. It's widely considered a romantic comedy, but I'd argue it's closer to a romantic melodrama with bits of comedic relief. More on that later.

The movie opens with Lee Leander (played by Barbara Stanwyck) getting arrested for stealing a bracelet right before Christmas. The prosecutor assigned to the case is John Sargent (Fred MacMurray, two decades before he'd appear in a supporting role in one of the best Christmas movies ever made). When Lee's defense attorney tries to claim she was hypnotized into stealing the bracelet, John uses it as an excuse to have the trial delayed until after Christmas, when the jury will be less reluctant to sentence a woman to prison.

John realizes he just ensured Lee will spend the holidays in jail, since she can't pay for bail, so he arranges to have her released until her hearing. But then he discovers she's got nowhere to go and no money for food, so he offers to buy her dinner. They discover they both grew up in Indiana, and John offers to drop Lee off with her mother for the holidays on the way to visit his own family. She's reluctant, since she hasn't been home since she ran away as a teenager, but she agrees in the hope her mother will be happy to see her.

They get briefly detoured on the way and wind up crashing through a fence in Pennsylvania. The owner of that fence performs a citizen's arrest and forces them to drive him to the town's justice of the peace at gunpoint. John and Lee give fake names and are on the way towards being railroaded, but Lee starts a fire as a distraction, giving them time to escape.

When they finally reach the house Lee grew up in, her mother is a cold, cruel woman who seems disappointed to discover her daughter's still alive. Rather than leave her there, John decides to bring her to his own family home for Christmas.

At this point, the movie plays out by the numbers for a while. She likes his family, they like her, and the two leads fall in love with each other. The movie does make a point of exploring its central thesis, that the only difference between its two leads is one grew up in a loving home and the other didn't and that criminality is more a function of circumstances than an inherent flaw. In other words, nurture over nature.

Credit where it's due: that's a fairly progressive theme for 1940. But seventy years later, it just feels pedantic. I like the movie's heart, but watching it unfold is boring.

At any rate, once we're through the Christmas parties, presents, cooking, and so on, it's time for John and Lee to head back. Since they're technically fugitives in Pennsylvania, they head through Canada to be safe. John points out that he has no authority to force Lee to return to the States and face prosecution. When she doesn't jump at the idea, he tries to convince her, going so far as to imply he'll support her financially. Still, she insists on returning to New York. Most of this plays out in front of Niagara Falls, incidentally.

Once there, John tries to throw the case by being too aggressive, but Lee - not wanting to risk his career - confesses to the crime. John offers to marry her before she's sentenced, but she refuses this, as well, instead suggesting the possibility if he's still interested when she's released. Then the movie ended without bothering with a resolution.

As usual, I headed over to Wikipedia to get a little context. Turns out a lot of this might have been the result of differing visions between the writer (Sturges) and the director (Mitchell Leisen). Apparently, the original script was quite a bit longer and focused more on John. On one hand, "longer" is hardly a selling point when the version that got made was already tedious to sit through, but there's a quote from Sturges that makes me wonder: "Love reformed her and corrupted him." That's a hell of a lot more interesting a premise than what made it to film. The movie is definitely about her being reformed, but the corruption aspect is entirely absent. Pity.

Backing up, I mentioned at the start the comedic elements only came in the form of supporting characters. A few of these are funny (the defense attorney was pretty good), but most were... let's go with "problematic." The worst offender is John's black butler, who's written to embody every regressive stereotype you can imagine. And then some. He's only in a few scenes, but they're some of the most painful I've endured watching old Christmas movies - and that's saying something.

There's also a farmhand who seems to be mentally retarded. It's not explicit, but reading between the lines, that seems to be what they're implying. The jokes at these characters' expense come off as mean-spirited and lazy. Considering those jokes represent a large portion of the overall humor, it leaves very little of value in that department.

As far as the holidays are concerned, this uses Christmas as a plot element and more importantly to play up the sense of loneliness and loss Lee experiences when she encounters a loving family and realizes she was denied this her whole life. It's a solid idea to touch on, but the movie leans too heavily on the melodrama.

All in all, it's not an awful movie, but it certainly didn't age well, nor does it offer any particularly compelling element that would justify a recommendation.