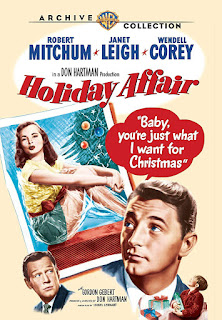 The question I most often confront when looking at old romantic comedies is how much of a curve I should grade them on when it comes to overlooking both the use of now cliched tropes and pervasive sexism. Is Holiday Affair good? Well, depending on whether we mean "good for 1949" or "good for 2020," we'll reach distinctly different conclusions. This movie aged... well, fine, relative to most of its contemporaries (or at least the ones I can think of). But it's still dated in ways I found difficult to ignore.

I'm not sure if anyone's put together a comprehensive taxonomy for the genre yet, but Holiday Affair would be classified with modern entries like Sleepless in Seattle. The "will they/won't they" tension is built around an illusionary question of whether the character will take a risk for love or settle for the more readily available partner/human obstacle. Really, this is all an update of the old "marry for love or money" cliché, with the caveat that it's generally less about money now than risk aversion.

To that end, Holiday Affair features one leading lady, two suitors, and several complications. The woman, Connie, is a widow and single mother constantly being told by male protagonists that she's too fixated on her late husband. One of these men is Steve, who she meets in a department store where he sells her a toy train set she's secretly buying on behalf of another store, which just wants to inspect it to determine how it stacks up against their own. When he catches her trying to return it (which I guess is against store policy here), she tells him turning her in will hurt her son, Timmy. Steve lets her off the hook but loses his own job as a result. She feels sorry and agrees to a date, despite the fact she's all but engaged to Carl, a lawyer who's been trying to win her hand for two years.

There's really nothing wrong with Carl, save that neither Connie nor Timmy are particularly enamored with the guy. Connie likes Carl - maybe she even loves him - but she's not hopelessly, compulsively, irrationally in love with him, so obviously it isn't meant to be.

Most of the movie is devoted to Steve psychoanalyzing Connie and trying to convince her to marry him instead. He wins Timmy's affection by buying him the toy train set, which causes an improbable chain of events keeping Steve around even after he and Connie attempt to go their separate ways. First, he's arrested due to a comical misunderstanding, then Timmy returns the train (with the help of a kindly CEO), so he can return Steve's money (Steve can barely afford to eat, so the purchase was irresponsibly impulsive, not that we're meant to see it as anything other than noble).

The movie ends predictably with Carl acknowledging that Connie doesn't love him, then with her following Steve to California, where he can build boats.

Okay, that boat thing was more predictable in the movie than my synopsis, but I'm trying to be brief here.

I feel like my tolerance for "products of their era" grows thinner with every old rom-com I watch. This one... it really wasn't bad taken on its own merits and viewed in context, and yet...

Ugh. The two men are both presented as ultimately reasonable, conscientious, and intelligent, while Connie is ultimately shown to be somehow simultaneously overly emotional and overly guarded. There are a handful of sequences where she does something that feels relatable to modern viewers, only to be chastised for it by the narrative later. Mostly, these concern her relationship with her son. She comes off as a great mother by today's standards, but the movie wants us to view her as insufficient without a man around to correct her. Granted, some of this is the result of economic storytelling: they manage to have scenes do triple-duty by setting up characters and relationships, being genuinely funny, and ultimately being incorporated in Connie's arc.

And that's part of what I'm struggling with here. Objectively, I think this is good writing, but the story just doesn't work as well as it once did.

Speaking of details that don't age particularly well... There's a scene where Steve grabs Connie and kisses her forcibly, and I came across some disturbing quotes around who was in control on set. Likewise, the actor playing Steve was ten years older than Connie, who was in turn just fourteen years older than the actor playing her young son. I realize that's a systemic problem with Hollywood casting both then and now, but this felt like a fairly egregious example.

Since I spent most of this review talking about elements that didn't age well, I'll also take a moment to highlight some things that did. The actors were good, particularly Janet Leigh as Connie and Robert Mitchum as Steve. (As a side note, Mitchum also starred in the not-quite-but-almost-Christmas suspense movie, The Night of the Hunter, which I found really effective. And unlike Holiday Affair, the themes in Night of the Hunter did age well). Harry Morgan also shows up in a minor role, and I've yet to see a movie where he wasn't fantastic.

Holiday Affair also had some impressive sets, particularly a recreation of New York's Central Park Zoo. Even more impressive was an effects shot used to close the movie. At the end, the main characters appear on a train as the camera pans out to reveal it's actually a toy going around a track. This sort of layered shot is of course easy to accomplish now, but pulling it off nearly seamlessly in 1949 is astonishing.

As far as rom-coms go, this is a solid entry, particularly for when it came out. However, I don't think this transcends the genre or offers anything particularly unique. If you love old romantic comedies, by all means, check this out. Just be aware it suffers from the same issues most of its contemporaries share.