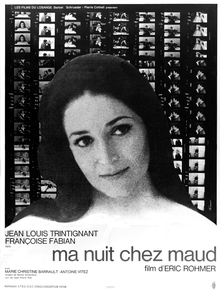 I'm going to be upfront about this: I'm a little out of my element here. French New Wave isn't a genre I'm familiar with, so if you stumbled across this review searching for any kind of informed analysis of this classic film, you might want to look elsewhere.

That being said, this is absolutely a Christmas movie, so our quest to watch and discuss literally every important holiday movie in existence wouldn't be complete without it. So whether it's a good idea or not, I'll dust off my philosophy degree and try to describe the 1969 French film, Ma nuit chez Maud or My Night at Maud's, as the subtitles helpfully explain.

The movie is... well, let's start with this: it's good. It's very good, very well made, and - if you're used to literally any other kind of movie - very slow. I wouldn't personally use the word "boring," but I suspect it's an adjective commonly invoked in reference to this film.

Stylistically, the movie is intended to be extremely realistic. It wants to pull you in, so you experience a few days in the life of its lead, Jean-Louis. That life, however, is by design fairly dull. You're seeing some of the most impactful days of this man's life, but that's still a pretty low bar. Not much happens, to the point I spent most of the movie under the impression there was quite literally no real plot or story.

The twist at the end is that there actually is a plot tying everything together, it just revolved entirely around other characters. I should note that twist should have been obvious (incredibly so), but it still caught me off-guard. I'll go ahead and credit the director's skill in building an atmosphere that felt so believable it never occurred to me to look for narrative connections, even though they were barely hidden at all.

How to even approach the plot? Jean-Louis has recently moved back to France after some time abroad. He's interested in a woman he sees in church, but doesn't manage to catch up with her. Then he runs into an old friend, who introduces him to Maud, a woman Jean-Louis forms a deep connection to. He spends the night at her apartment, but doesn't sleep with her. The next day, he runs into the woman from church, approaches her, and arranges a date. He also spends the night at her apartment, likewise in the strictly literal, non-sexual, sense. Maud leaves town, he marries the woman from church, and five years later he runs into Maud, learns she shares some history with his wife, and opts not to discuss it.

If you're thinking that sounds light on content, rest assured the substance of this really isn't in the story but the details. Almost half the movie consists of an extended conversation between Jean-Louis and Maud about religion, Pascal's Wager, and relationships. The movie's far more interested in character than plot and more interested in theme than either of them.

And that theme is... Uh... Okay, it's definitely got something to do with Pascal's Wager and sex. What, exactly, is less clear. I can read morals and themes into this, but I'd basically be guessing. The fact nonsexual relationships between men and women are consistently presented as more intimate than sexual ones seems significant. Likewise, I'm guessing it's meaningful that the main character defines himself through a series of philosophical beliefs he's intellectually attached to but ready to drop in a heartbeat.

I could probably stretch and tie that into Pascal Wager, but "stretch" is definitely the right word. I doubt I got more than a fifth of the subtext and wouldn't be surprised if it's closer to a fiftieth. But since I don't really have the time or inclination to track down a bunch of textbooks on French New Wave, I'll instead say I enjoyed the connections themselves. I found the nature of the relationships of the characters interesting. I loved the way they were presented, the sense of depth, and the way the discussions felt effortless. Despite the subject matter, the conversations were believable - at times, they were similar to pretentious discussions I engaged in back in college. They talked like highly educated people trying to convince others (and more importantly themselves) they were more certain of their convictions than they really were. I also enjoyed getting a far more complete look at the characters' personalities than you'd ever see in a conventional film, thanks to the sheer amount of time spent with them.

Like most of the thematic elements, I was left a little uncertain why Christmas was selected for the setting, but was able to confirm that it was absolutely intentional: the director delayed filming an entire year to line up the actor he wanted with the season. My best guess is the holiday is sort of a symbol for both the enduring nature of religion, as well as an acknowledgment the bulk of our reasons for celebrating are basically lies. Regardless of why he used the holidays, they're a recurring presence in the background and in discussion.

Despite enjoying and respecting the movie, I can't recommend it unconditionally. The pace is glacial in comparison to movies from that era, which in turn have glacial paces compared to modern movies. If you're ready to sign on to that, this is fascinating; otherwise, you're likely to fall asleep. But if you think you're up for something cerebral and slow-paced, this would definitely make for an unusual Christmas viewing experience.