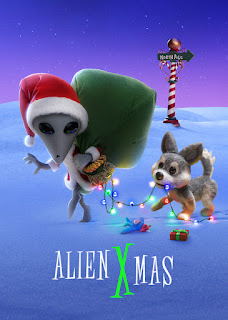 I want to start off by acknowledging there are almost certainly people out there who'd really get a kick out of this new stop-motion Netflix special. There are things to like about this - I'll get to those in a moment - and I really like how dedicated this is to capturing the spirit of 1950s B-movie sci-fi features. But while I like what it was going for, the special fell short for me. And unfortunately, I think this is one of those concepts where "almost good" isn't good enough.

The premise relies on a species of alien marauders called klepts, who go from world to world stealing resources. These beings were once brightly colored, but their cruelty transformed them into grey lifeforms, devoid of compassion. So far, so good.

One of the two main characters is X, the smallest of the klepts, who's dispatched to the North Pole to construct a device that will nullify Earth's gravity, making it easy for the alien ships to gather up the planet's possessions. The other main character is an elf child who receives X as a gift after her father mistakes it for a doll.

By that time, X already programmed his robot to start building the doomsday weapon. But as he's forced to spend time with the elves, he starts learning about kindness. When the girl gives him a gift, he discovers the joy of having someone care about him, a feeling he's compelled to return. He helps her fix Santa's sleigh, which will both let her father take a break from work (he was in charge of that) and save Christmas.

Everyone's overjoyed, the true meaning of Christmas was shared, and the words, "The End," appear on the screen.

Then all that goes to hell when the rest of the klepts launch an all-out attack on Christmas town, vaporizing walls and paralyzing elves with freeze rays. And, yeah, okay, for a couple minutes this thing is pretty rad. The elves launch a counter-offensive weaponizing their gift-wrapping tools. Santa pulls out a pair of candy cane nunchucks. No one seems to die, but there's far more widespread destruction than you'd expect from this sort of thing. And obviously that's the point - to subvert your expectations and take the story in a bizarre direction.

Eventually, Christmas town is conquered, and it feels like all hope's lost. Then X gives the leader of the klepts a gift, which fixes everything. Santa's sleigh was wrecked in the battle, but the aliens deliver the gifts, so Christmas is saved.

So. That probably sounds like the kind of thing I love. And you can throw in some really solid stop-motion animation: this thing looks great.

Here's the "but." The pacing on this is awful. It's far too slow and kid-oriented, at least until the battle. It also doesn't help this is narrated from start to finish. So, you're hearing descriptions of everything you saw, complete with explanations of why it's happening. All that just saps the energy out of this, leaving it lifeless. I appreciated the work that went into this, and I enjoyed the attack, but overall it left me bored, which undercut the effect the twist should have had.

It was a good effort, but it didn't work, at least not for me. That said, I half-expect a generation of kids to grow up loving this. Hell, I expect some of their parents will be more forgiving than I was.

Overall, though, this felt like something that was almost good, rather than something actually good. And sometimes almost is enough, particularly when it's bizarre enough. But not this time, not for me. If it had been shorter and if they'd cut most of the narration, I think we'd be having a different conversation. Pity.