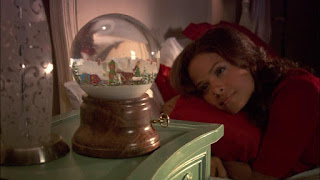 This one was quite a rollercoaster. It started off weak, then got progressively weirder through the second act. By the time it hit the climax, the movie had us fascinated with where it would go next. Then the whole thing was resolved through what might be the least satisfying use of deus ex machina I've seen in my entire life.

So, "mixed" would probably be a generous summation for this bizarre fantasy rom-com.

I'm going to jump right into the story because this thing is bonkers. The protagonist is "Angela," a single woman with a somewhat unhealthy affection for Christmas, which is... honestly kind of refreshing. The vast majority of these start with a gender-flipped Scrooge - going the opposite way is a nice change of pace.

She lives in an apartment building owned by her parents, who also own and run the deli she works in. Her mother keeps trying to fix her up with men by moving them into apartments near hers. Angela is annoyed and frustrated with this behavior, because she views it as an invasion of her privacy, which it 100% is. She's also not keen on her family's tendency of bursting into her apartment to watch sports, make food, and otherwise interrupt her life.

Angela dreams of escape, and her wish is granted when a package appears outside her door containing a magical snowglobe that she's teleported into, where she finds a miniature village of people eternally celebrating a picturesque old-fashioned Christmas. She naturally assumes this is all a dream, both while she's there and when she returns to the real world the next morning. But the next night she goes again, this time returning with a pair of very tangible mittens she received as a gift from Douglas, a resident of the village she's attracted to.

As she travels back and forth, Angela's life in the real world is negatively impacted. She's constantly late for work, she misses her sister's baby shower, and her friend starts thinking she's crazy. I should also note there are complications around a burgeoning friendship with love interest #2, Eddie, a new neighbor Angela is reluctant to consider because he was handpicked by her mother.

All this culminates in an impromptu dinner invasion in her apartment. Her parents bring Eddie, and Angela starts to fall for him. But this is all interrupted by Douglas, who appears in her bedroom. After the initial shock and requisite lies, Angela tries making it work with Douglas. She shows him around the city, which goes about as well as you'd expect. While Douglas appears to be an adult human, he acts more like a child, a fact which makes it all the more uncomfortable when she tries to seduce him (fortunately, she doesn't get far).

Just when this development has run its course, a second visitor from the snowglobe makes her way to the real world. This time it's Marie, a woman who was in love with Douglas and feels like he was stolen. Angela, realizing things are spiraling out of control, tries to convince Marie and Douglas to go back, but she ends up teleporting herself in, instead. Making matters worse, she was standing and holding the snowglobe when this happens, causing the object to fall. The dome is fine, but the mechanism is busted. Giant gears and snapped springs now poke through the ground, and she's unable to return to the real world.

Eddie was around to see this, so he at least realizes there's magic involved. On the inside, Angela searches for help, but initially finds only the same simplistic mindset she'd previously been entranced by.

For those keeping track, this would be the moment Lindsay and I got really intrigued by where this movie was going. For a moment, I thought we'd found something special.

But that moment was fleeting. She basically just realizes there's no one version of the perfect Christmas (or perfect anything), so a mailman shows up with a snowglobe of her apartment building. She's teleported back, and with Eddie's help manages to repair the snowglobe and send Douglas and Marie home.

Cut to a year later. Angela now runs a store selling Christmas ornaments, and she's living with Eddie. She's moved across the street, so she's still close with her parents but isn't in their building. And last we saw Douglas and Marie, they were a couple in the now-repaired snowglobe. Everyone's happy. The end.

So, I think this movie illustrates how important endings can be, particularly if the movie in question is fueled by a narrative that spirals out of control. I don't think there's anything wrong with a story that goes in bizarre directions - those can sometimes be the most fun - but the more untethered a story becomes from recognizable patterns and conventions, the more important the destination becomes. And this movie goes nowhere.

I'll put this another way: this went from "this might be a hidden gem we recommend unconditionally" to "this was a waste of time" at the drop of a hat. It needed payoff, and it didn't deliver.

I want to back up and try and wrap my head around what the premise was, or more accurately, what it was based on. At its core, it's a spin on an Oz/Wonderland motif (sometimes called a "portal fantasy"): person from our world goes on a voyage to another world and learns stuff. Only it deviates from that model almost immediately, since the main character is rapidly traveling back and forth. There's no quest and really no danger (aside from the brief threat of maybe being trapped there at the end). And a large part of that world centers on the character who follows her back.

In short, it doesn't really stick with the Oz motif, nor does it mimic any version of Babes in Toyland I'm familiar with (though the look of the globe-world was somewhat reminiscent). Again, I don't consider it a problem that this doesn't stick to a blueprint. If anything, it's good. Or it would have been good if they'd managed to pull it off.

So... A for effort? Maybe A-. This just didn't work. And that's barely touching on the fact the movie punishes the lead for pushing back on her family for violating her personal space and failing to respect her boundaries. And also that "Christmas store" thing at the end undermines the implication she's learned anything or grown as a person. If her obsession with overly "classic" Christmas was supposed to be a flaw she overcame, why does this end with her peddling that to impressionable shoppers?

I feel like I'm falling down a rabbit hole, and I'm going to stop before I spend more time analyzing the ending of this thing than was originally spent writing it.

Other than that, this is fine, I guess. Nothing special, aside from the misplaced interest at seeing the story get more and more convoluted as it goes. The comedy isn't bad, but it never transcends what you'd expect from a mildly amusing sitcom. The cast is kind of fun. I appreciate that we're following a multiracial family.

But ultimately this was a disappointment. It's better than a lot of made-for-TV Christmas movies, but it's still not worth the time.