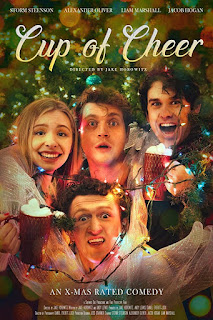 Cup of Cheer is at its best when it remembers its premise and adheres to holiday rom-com tropes and conventions, which it does about 60% of the time. It does a decent (though not entirely even) job playing with elements lifted from Hallmark and its imitators. The problem is the other 40%, which goes for generic, lowbrow shock humor - dick and fart jokes, in other words, and I do mean that literally. Hell, there's a character who's basically a walking fart joke - I haven't seen every Hallmark movie out there, but I'm pretty sure that's not lifted from them.

Also, be aware the movie uses homosexuality as a punchline on several occasions. The way these jokes are presented comes off as more lazy than offensive, not that that's much of a defense. At times, the movie feels like it's mimicking movies in this genre (spoof, not rom-com) from twenty years ago, and those jokes felt tired then.

Big city reporter is sent to a small town to write a story, where she meets a guy who runs a hot chocolate shop that needs to come up with rent by Christmas Eve, or it'll be shut down and replaced by a corporate chain, only the guy doesn't want to accept help for no particular reason, but eventually he learns the true meaning of...

Yeah, the point is it shares a premise with a thousand made-for-TV movies. There's definitely a missed opportunity in how it tells that story. The movie is constantly making fun of how stupid the genre it's mocking is (agreed!), but it stops there. Parodies that endure take it a step further and manage to outdo their targets by telling the story as well or better while still mocking it (the best Mel Brooks movies are an obvious example). Cup of Cheer isn't interested in storytelling at all - only in the jokes.

The humor comes both from playing up the absurdity intrinsic to the genre and adding in weird asides. Some of those are playing off holiday movie conventions (i.e.: there's a time-traveling British noble who becomes an important minor character), while others are just trying to generate laughs by being inappropriate (again, the villain with digestive issues).

I'd be lying if I said I never laughed at the out-of-place jokes. Occasionally, they'd drop in something wildly out of place, and it would work for me, though on a whole I feel like this would have worked better if it had stuck with PG humor, rather than leaning into an R. For both better and worse, the writing felt heavily inspired by South Park, though it lacked that show's commitment to narrative arcs.

All that said, the jokes that land are really funny. The actors are well suited to this kind of humor, and the movie does a good job recreating the look of the movies it's playing off of. The parts that are enjoyable are a lot of fun.

The problem is there wasn't really a full movie's worth of material here, so what's present is stretched too far then padded with stuff that doesn't fit.

If you're looking for a laugh, my advice is to turn this on, watch it while you enjoy it, but then stop as soon as it starts wearing thin. Trust your instincts - this movie is the embodiment of diminishing returns.

Okay, actually there is a great joke in the last sixty seconds of the movie, so maybe skip ahead to that before turning it off. It'll make sense as long as you made it thirty minutes before giving up.