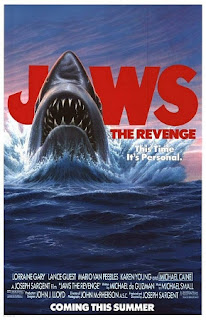 I'm counting this as a Christmas movie, even though it means watering down the litmus test we've used in the past. The lead-up to Christmas itself only requires a third of the movie's 90 minute run-time, while New Years Eve falls at the halfway mark. Still, Christmas decorations are present until the end, so I'm giving it a pass.

I should probably mention I've only seen the first Jaws and this one. In theory, that should mean I'm missing two movies from the story, but Wikipedia assures me the third installment was excised from continuity.

The Revenge opens with a holiday celebration in Amity, where the original was set. At some point, Martin Brody, the protagonist of the original Jaws movie, died of a heart attack (i.e.: wasn't interested in making another of these damn movies). His wife and older son, Ellen and Michael, take over as the leads, while his younger son, Sean, is killed off in the first few minutes.

There are two culprits resonsible: the first is a gigantic great white shark seeking revenge against Martin's family, presumably because of the sharks he killed. It has an accomplice when it goes after Sean, though: Christmas. Specifically, a bunch of people in Amity are singing carols that drown out his cries for help after the shark bites off his arm. Undisturbed, the shark is able to jump up and finish the job.

Ellen, horrified at what's happened, flies to the Bahamas to spend the holidays with her surviving son, Michael, who works as a marine biologist with his friend, Jake. He's got a wife and young daughter, and they live on the beach. Ellen, having a strong suspicion that a shark is hunting her family, begs Michael to quit his job and stay away from the water. She's likewise horrified whenever her granddaughter wants to go swimming or ride on a boat.

Everyone thinks she's going crazy, including herself. She manages to find some peace of mind when she becomes involved romantically with Hoagie, a disreputable pilot played by Michael Caine.

Her son is soon spooked when the shark shows up in the Bahamas and tries to eat him. It's the same one who killed his brother, though he refuses to believe it. He keeps it a secret from his mother, not wanting to worry her, and tries studying it with Jake. Eventually, there's an underwater chase sequence through a sunken boat where he narrowly avoids it.

Angry that Michael got away, it goes after the youngest member of the Brody clan, attacking an inflatable banana boat she's riding with friends. She survives, but an adult present gets eaten.

Realizing she was right all along about the magical shark, Ellen steals her son's boat and goes to confront the creature. Her plan is somewhat unclear: she brings no weapons, and when it finds her, she just kind of stands still, giving it an opportunity to jump up and eat her. Maybe she's thinking that would break the curse or something?

Just before it can grab her off the boat, Hoagie swoops down with Michael and Jake. They manage to scare the shark and land. Then the shark comes back and sinks the plane. They make it to the boat, where they MacGyver up something to mess with the shark. Only to use it, they need to get the shark to swallow it, which results in Jake getting chewed up and dragged into the water.

Eventually, Ellen manages to ram the shark, an act which has a very different effect depending on which version you're watching. In the one I saw, the shark was impaled and sunk. In some versions, it literally explodes, the boat sinks, then they find Jake wounded but miraculously alive in the water.

Either way, Ellen goes home afterward, and it all gets wrapped up as a happy ending.

So. What the hell was that?

First of all, I don't entirely hate the premise of this movie. Essentially, it's trying to take Jaws back to its roots and tell a vaguely supernatural revenge story in the vein of Moby Dick. That's kind of interesting, and with the right production values, it might have worked.

But the effects in this were just abysmal. The shark looks like it's made out of rubber, and the scenes where it attacks are hilarious. The direction also felt off. It was clearly trying to duplicate moments from the original but without Spielberg's flair. Same goes for the writing: they were clearly trying to build interesting, bizarre characters, but they lacked the skill to pull it off. As a result, the dialogue was just odd most of the time.

Several actors fared a bit better. Caine was, well, Caine - when has he ever not been fun? Lorraine Gary did good work, too, as did Lance Guest. The two of them managed to sell the sense of obsession at the core of the piece better than should have been possible: to the limited extent the movie works, it's thanks to the cast.

But it's just too warped to work. The tone doesn't support the surrealist premise, and the unbelievable character interactions get tiring after a while.

Let's talk Christmas. As I said, holiday decorations and celebrations are present throughout most of the movie. As far as I can tell, these were mainly included for that one scene at the start. It's clearly going for contrast: the joyous singing juxtaposed against Sean's screams. This is symbolism 101: they even have a buoy mirror the shape of a Christmas tree in the background.

I'm not sure if it was supposed to go any deeper than that, if they thought the holidays added some sort of magical, otherworldly quality or something. That kind of junk is pretty common. Maybe they were trying to play with the idea that the shark was some kind of indifferent god.

In the end, I'm almost of two minds about this. On one hand, it's every bit the mangled, badly constructed failure it's supposed to be. But on the other, the concept is just too quirky and ambitious to hate, especially with Michael Caine hanging around. It's a bad movie, no question, and I wouldn't recommend it to the casual movie viewer, but it's certainly a unique experience.