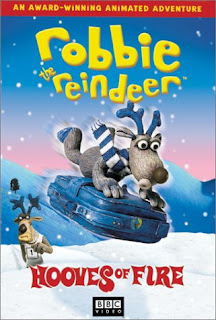 Hooves of Fire is a BBC claymation special about the son of Rudolph joining Santa's team. Rudolph's name is never explicitly spoken due to copyright issues, but there's no ambiguity about Robbie's heritage. The same can be said about Aardman animation - their name isn't on this, but their style permeates the special. Also, this was directed by Richard Starzak, who'd later go on to create Shaun the Sheep.

Overall, I enjoyed this, thanks to some clever jokes and fun designs. That said, the concept was a bit one-note, there were some unfortunate character directions, and the tone needed work. In short, it was good but not amazing.

The special starts with Robbie arriving at the lodge where Santa's reindeer live and train. Instead of glowing, Robbie's nose functions as a sort of navigator. Also, he later learns to bounce off it, but I'm getting ahead of myself. The nose is basically all Robbie has going for him - he's lazy, out of shape, and self-obsessed.

We're quickly introduced to a handful of minor characters who don't matter and three who do. Blitzen is sort of the team's default leader. Unfortunately for Robbie, he's harboring a grudge against Rudolph for showing him up years ago. Next up is Vixen, the special's fake love interest. Robbie falls for her at once, despite the fact she's pretty awful to him and everyone else. Lastly, there's Donner, who falls in love with Robbie for no discernible reason whatsoever.

Blitzen encourages Robbie to take it easy, allowing him to think Santa will take him for his nose alone. Then, at a party at Claus's house, it's revealed the new sleigh has a navigation system installed, making Robbie's nose redundant. With a little reverse psychology, Blitzen convinces Robbie to take off on his own.

After he almost freezes to death in a blizzard, he's found and thawed out by some elves. He convinces them to let him help in the workshop, but this doesn't go any better for him. Donner finds him, tells him the truth about Blitzen, and convinces him not to quit. Instead, she suggests he trains with "Old Jingle," an ancient reindeer, who teaches Robbie the aforementioned nose-bounce. A training montage later, and Robbie's ready for the "Reindeer Games."

He winds up losing due to time spent rescuing Old Jingle, as well as a delay when Blitzen cheats. But the whole thing reveals Blitzen's an ass and Robbie's both skilled and focused. Somewhere in there he gets over Vixen and falls for Donner, too.

Like I said, there are some great moments. But, frankly, I kind of hated the character of Robbie, who comes off as an entitled jerk. To be fair, that's at least partially intentional - they wanted him to be the opposite of Rudolph - but it makes it hard to root for him. If they'd gone with a more comical tone, I think this would have been less of an issue, but despite the farcical gags, this had an oddly realistic feel.

The reason why is a bit complicated. Stylistically, the characters were incredibly cartoonish (hell, Mrs. Claus and her baby both have beards like Santa's), but it's framed and edited more like live-action. Even the line readings have a sort of understated quality to them, like they exist in a functioning world.

The tone is also muddied by some content choices, though these didn't bother me. Just be aware this silly family comedy includes some slightly harsh language, as well as a pretty direct seduction scene between Blitzen and Vixen.

Normally, these would be merits - honestly, they might still be in some ways - but the price is a lot of the energy is drained from the special. There's very little sense of tension, even when there should be. Ultimately, this is better background material than something you want to devote attention to.

I'd argue part of the problem is a disconnect between the concept and execution. This doesn't know whether it wants to be an unofficial continuation of the Rankin-Bass Universe, a parody of it, or something else entirely. The point gets lost as it shifts around between these choices.

There are actually a couple versions of Hooves of Fire. When it was picked up by CBS, they recorded a new audio track toning down some of the British accents (odd, since the original wasn't hard to understand). We watched the original then caught a few scenes redubbed by American actors out of curiosity. I actually thought the American version had a bit more energy, though the British clearly felt more organic. I'd recommend sticking with the original, though I don't feel as strongly about that as I expected to.
90's Comedy Erin Snyder Fantasy Special Stop Motion