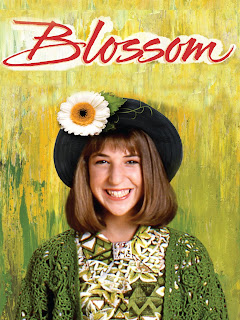 Blossom is one of those shows I remember watching, but I don't actually remember specifics about. It was about a girl, who wore big hats, and her friend? Watching this episode only convinced me that I'm probably better off forgetting it.

It's an incredibly generic-feeling sitcom, featuring the broadest acting imaginable. You're on film, you don't need to play to the cheap seats.

The titular character lives with her father and two brothers, all of whom spend this episode bumbling around to an impressive degree. There's an early subplot about Blossom being a terrible student driver. Her grandfather takes her driving, only for them to just barely luck out of a ticket for driving 7 miles per hour on a main road. The punchline is that her grandfather is a terrible driver too (no one knows how he got to their house, he doesn't seem to live there) and they're all in danger/recklessly endangering others. Laugh track, fade to commercial.

The more holiday-ish plot concerns her father's job worries. He's a musician, and he's just lost a gig due to a strike. He ends up taking a humiliating job playing carols in the mall to make some cash. This is all fairly boring, as the actor's performance is so ridiculous that I neither believe his situation nor feel any sympathy for him.

In the meantime, the kids also burn the turkey and the tree, but somehow not the house. The father returns home, having lost his job as well as some presents he bought off-screen and his car to a roadside thief. The kids try to make him feel better, and he sends them out to get some pizzas in the hopes of salvaging some of the holiday.

Once they're off, he tries to watch some tv, only to be depressed and irritated by every channel showing It's a Wonderful Life. Note: this is the only tie-in to the title. There is no reflection on his life, or how things could have gone differently, or how much he matters to others.

There's a knock at the door, and it's his ex-wife's boyfriend (mentioned in passing earlier in the episode), dropping off some presents for the kids from them both. The father proceeds to gleefully tear the tags off the presents from the boyfriend and relabel them to be from him.

And that's the end of the episode. I think if it were better written and acted, if I'd had any reason to care about these characters, it might not have been so strange that there was literally no comeuppance from blatantly stealing credit for Christmas presents. As it was, I expected the presents to be badly chosen, or otherwise to backfire. But there was no more episode. It just stops there, with a pathetic man stealing presents in order to feel some shred of satisfaction with his pathetic life.