Bunheads: A Nutcracker in Paradise (2012) 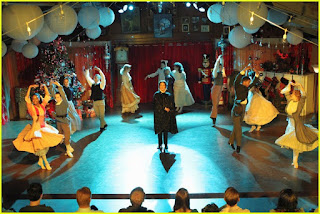 Let's be real. Here's what I want you to take away from this review: BUNHEADS IS STREAMING AGAIN. It's on Hulu. Go. Get thee to Hulu. If you are a musical theater nerd like me, go watch the first couple episodes of Sutton Foster and Kelly Bishop snarking at each other and see if you don't fall hard.

I'll pause here for a quick moment of silence for the fact that this show only received one season.

The basic premise is that Foster plays Michelle, a professional-dancer-currently-slumming-as-a-Vegas-showgirl who decides to change her life by getting married and moving to a tiny upscale California town, where she helps her mother-in-law (Bishop) run a dance studio. The show is by the woman behind Gilmore Girls and features her standout themes: intergenerational female friendships and pop-culture snark. I prefer this to the earlier show because this one is also about dance and art and living a creative life. (I promise The Marvelous Mrs. Maisel is on my to-watch list. December is a busy time around here.)

This episode, however, might be my least favorite (although I missed out on seeing the whole series the first time, and I'm about to rectify that). The Christmas-ness is oddly nonspecific, too. There are decorations in a few scenes, and the dance school is putting on The Nutcracker as their big money-maker, but no one talks about it being December. It might not actually be December, but it's not clear from the episode.

The short version of the plot: the main girls in the dance class are dealing with boy drama. Boo had a crush on Melanie's brother, but he doesn't like her, he likes Ginny, who likes him, but she's best friends with Melanie. And Boo is now interested in another dance student, Carl, who she had originally brushed off. Michelle brokers some understanding between the girls.

Sasha has returned after quitting dance for a while, and in the meantime Fanny has hired a semi-professional "ringer" who is creepy in her complete fixation on dance (an attitude not that different from Sasha's at the start of the show). Fanny is having trouble with her long-term gentleman friend as well.

Boo manages to patch things up with her possible boyfriend, but no one else's love life goes well. Michelle's attempts to help Fanny with her love life backfire, and Melanie and Ginny return to feuding after Ginny prioritizing her friendship once over her nascent relationship causes said relationship to implode.

All this stress comes to a head during the Nutcracker performance, when... ugh. It's one of those things that is supposed to be horrifying and funny, but for me just ends up uncomfortable to watch. Let's just say Michelle unintentionally injures most of the dancers and, after a startlingly abrupt dream sequence, leaves town over the girls' protests before the parents want to have her sued or arrested.

This episode does feature some lovely dancing, and Sutton Foster's powerful rendition of "Maybe This Time" during the dream sequence, which is both a call back to her first-episode desire to audition for Chicago and a thematic expression of how she sabotages everything without meaning to.

Bunheads was a quirky show that wasn't for everyone, but I liked it quite a bit and wish it had gotten more of a chance.
2012 Dramedy Episode Lindsay Musical