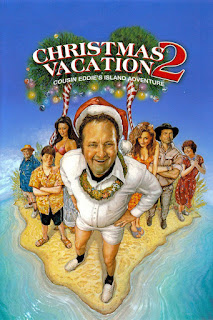 Calling this made-for-TV movie "bad" doesn't really address the magnitude of just how awful it actually is. To even begin to do so, I'll try something a bit counter-intuitive: I'm going to compliment the filmmakers. Perhaps "compliment" is too strong a word - I'm going to acknowledge a possible explanation for the movie that's ultimately generous.

Having just watched through Vacation 2, I am honestly unable to dismiss the following possibility: the movie was intentionally made as bad as possible either as an attempt to mock the audience, screw over the studio, or both.

This is, of course, not the only possibility. Indeed, Occam's Razor would slice through this theory and leave us with a simpler one: that the filmmakers responsible for this mess are so bad at their jobs, they were unable to produce anything better. Those of you who haven't seen this movie are doubtlessly drawn to that explanation. But you don't yet understand just how astonishingly, stupidly bad this movie is. The truth is, it may be easier to accept the idea this was a malicious enterprise.

Perhaps Poe's Law should be adapted to explain this phenomenon.

Expectations are set low by the premise: the movie follows Cousin Eddie from the National Lampoon Vacation movies. Cousin Eddie, for those of you lucky enough to have forgotten, is the character played by Randy Quaid. He's joined by Miriam Flynn, reprising her role as his wife, Catherine. Dana Barron, the child actress from the 1983 Vacation, shows up as well, now twenty years older. Finally Eric Idle reprises his bit part from European Vacation (this movie couldn't even make Idle funny - we'll label this exhibit D). Everyone else is new - we'll get to them in a moment.

At the start of the movie, Eddie works as a lab rat at a nuclear waste research company (literally, he is injected with radioactive waste and monitored for side effects). His coworker is a monkey, and the company needs to downsize his department. Since the monkey's smarter, Eddie gets laid off.

This is a real scene in a real movie that a real studio paid a real writer to write.

I should mention that he's living with Clark Griswald at this time. If you're wondering why Chevy Chase wasn't listed when I went through the list of returning actors, it's because he's not actually in this movie. I guess he's out of town or something - it never really seems to come up.

Eddie tries to take a bath, and the plumbing explodes, causing water to shoot out of the shower, toilet, and eventually the windows. This is not relevant to the plot, and aside from a few cuts to show us this is still happening later in the movie, it doesn't affect anything or serve any point. It does eat up about five minutes of screen time, though.

Also, the dog farts. This also eats up about five minutes of screen time (spread out over the course of the movie), and somehow is sort of relevant to the plot.

When Eddie finally goes into the office to pick up his severance check, the aforementioned monkey bites him on the ass. In order to keep him from suing, his former boss gives him an all-expense paid trip to an island in the Pacific that both is and is not Hawaii.

In addition to Eddie and Catherine, they bring their son, Third, as well as Audrey (from the original Vacation movie), and Uncle Nick. Audrey's invited, because she's depressed her boyfriend turned out to be married. Uncle Nick is depressed, because his wife (in her 70's) left him for a 20-something. Nick is played by Ed Asner, which means Home Alone: The Holiday Heist is no longer my least favorite Christmas movie he appears in.

They go to the airport, and the dog farts. A lot. Also, Eddie clumsily injures Eric Idle.

When they reach the island, they're presented with leis. Nick assaults a few of the women there, including their guide, Muka Luka Miki, the last major character in the movie. Oh, at the end we learn she's the wife of the man Audrey broke up with. Again, not relevant and without consequences.

Soon, they go on a boat trip and get stranded on another island. Most of the movie is them building shelter, hunting, and celebrating Christmas.

Oh yeah, Christmas. Was that supposed to be relevant?

For a movie about a Christmas vacation, the holiday is bizarrely absent for most of the run time. There's a lot of Christmas music in the background, and the scenes in Illinois feature decorations and mention the season. But most of the time on the island is focused on more pressing concerns, like the dog farting, the dog peeing, or Nick and Third simultaneously spying on Muka Luka Miki while she bathes. Perhaps I should have mentioned misogyny when I ran through the list of main characters.

When they get around to remembering Christmas, it's about as by-the-numbers as this crap gets. Everyone starts depressed, someone argues that Christmas isn't about commercialism or something, Jesus's name gets dropped, and they decorate a tree with stuff that's lying around.

They get off the island with the help of another joke about marital infidelity, then Eddie has to land a plane, since he accidentally gave the pilot a concussion. The ending makes no goddamn sense, even relative to the rest of the movie, but Eddie and the monkey from the beginning become pilots, Nick's wife comes back and he bosses her around, and Third appears to be turned on by a video of his sister's exotic dancing.

Right about now, you probably think you understand why I said the movie was bad. But, here's the thing - despite the fact this may rank among one of the worst scripts ever written, the acting, direction, and editing still manage to undercut it. Shots linger awkwardly after punchlines. Characters shoot the camera reactions to jokes that were never funny. And this doesn't even address the extended sequences where characters - usually Eddie - ham it up to a degree that's embarrassing to watch.

Literally, every minute - every second of this movie - feels as though it's daring you to turn off the TV and find a better use of your time. It's not just bad - it's so bad, so consistently, it actually seems plausible that was the intent.
00's Comedy Crime Against Humanity Erin Snyder Movie