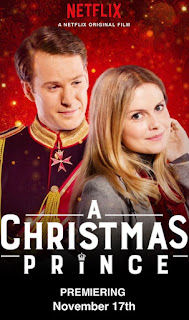 A Christmas Prince is Netflix's new tween-friendly movie that proves the internet giant is capable of competing in the crappy made-for-TV realm typically dominated by Hallmark. Personally, I kept hoping a few characters from A Princess for Christmas would show up in cameos, but no dice. Maybe they can make a sequel where their nations go to war or something - I hear shared cinematic universes are all the rage these days.

You should be able to figure out at least sixty percent of the movie from the title, but I'll throw you a bone. The movie opens to a montage of New York just before Christmas. I often find myself wondering if there are film companies that send people out every time it's snowing in Manhattan in December and start filming for the sole purpose of selling that footage to productions looking for generic shots of flakes falling in Rockefeller Plaza. There must be, right?

Amber, the movie's protagonist, dreams of one day making it big, but for the time being she's stuck in a low-level editing position at a website where she has to rewrite stories without much credit. She works with her two best friends, Black Woman and Gay Man, who, despite only appearing in a few scenes, are sources of advice and wisdom. The same can be said of her father, the deli-owning, native New Yorker whose fake accent should really get someone at Central Casting fired.

A few minutes in, she's given her first break. Her snooty boss sends her to Aldovia for the holidays. This totally believable European country features snow-covered hills, fake Bavarian cottages, at least one man-eating wolf, and a populace speaking in posh English accents. Oh, and of course a monarchy, as alluded to in the title.

The monarchy, incidentally, is having issues. The king died the previous year, and the prince in line for the throne is widely thought to be a millionaire playboy who takes nothing seriously. But it turns out that's just a ruse. In reality, he dresses up as a bat and patrols the streets of Gotham every night, trying to avenge his...

Sorry. Wrong millionaire playboy. This one's reputation isn't exactly a ruse; it's just... wrong for some reason. The movie seems committed to the notion that the media portrays him in a negative light, but there's no real explanation why or how they do this. But Prince Richard - oh, yeah. His name's Richard, just like his father, King Richard the 1st, because the people who wrote the script are incapable of feeling shame.

The one thing the media gets right is that he has very little interest in fulfilling his royal duties, whatever those are. He's reluctant to accept the crown (again, don't expect much in the way of an explanation). This is something of plot point, as the bizarre laws of Aldovia require a new king to be crowned no more than a year after the death of the previous.

Of course, we don't learn any of this until Amber finds herself pretending to be the new tutor for Prince Richard's young, crippled sister, Princess Emily. She winds up with the fake identity after breaking into the castle and being mistaken for a tutor, because Aldovia has clearly never heard of security.

Princess Emily actually uncovers Amber's secret pretty quickly, but is willing to cover for her, as long as she promises to write the truth about her brother. Amber winds up helping the sheltered child learn important lessons about experiencing life despite being different, and some other bullshit.

Amber eventually uncovers a secret - turns out Richard was adopted, and no one told him. This technically would make his ascension illegitimate, but Amber - who's of course falling in love with him after he saved her from a wolf - resolves to keep this hidden. However, Richard's sniveling cousin (who's of course next in line for the throne) has no such compunctions, nor does Richard's ex. They find the evidence, along with proof of Amber's true identity, while rooting around in her stuff, then reveal everything during a Christmas Eve ball.

Amber then saves the day by discovering the king hid a secret proclamation in a Christmas ornament he made naming Richard king, despite the law. Why he did it this way instead of just quietly changing the law fifteen or twenty years earlier is never explained. That seems to be a running theme with this movie.

Amber doesn't stay to celebrate. Assuming everyone hates her for lying for so long, she returns home to New York. Her boss throws out her story, declaring it's too fluffy and kind. Amber quits and sets up a blog, where she can tell the story her way. Astonishingly, we're supposed to care.

Cut to New Year's Eve - Amber's working at her father's deli. Which is odd - it's only been a few days since she quit her last job; didn't she want to take a week off or something? Of course, none of that matters, because Richard shows up in time to propose and kiss her at midnight.

To be fair, she at least raises the point they barely know each other (seriously - this all took place over about a week, and they only spent a fraction of that time together), but he insists he's sure, because it's the only way anyone can think to end this goddamn movie.

That and two jokes referencing penises are basically the film in a nutshell. One interesting side note, though - the actress playing Richard's mother, the Queen of Aldovia, is Alice Krige, who played the Borg Queen in First Contact. I'm going to assume it's the same character, this is a prequel, and things just went really poorly for her between movies.

The film is littered with about as many cliches as you'd expect from something that would unironically name a deceased character "King Richard." I'm sorry: King Richard, patron of the orphanage - I wouldn't want to sell his legacy short.

If that's not obvious enough for you, Amber breaks several priceless artifacts due to clumsily lumbering around. Is there a random generator somewhere that writes these scripts?

Lest you think the writing is the only aspect that sucks, let me tell you a little more about that wolf that accosts Amber in the woods. Someone thought it would be a good idea to use CG to make it look like it was snarling. *Spoiler* It wasn't.

I don't think I need to say this, but you don't need to see this unless you have a ten-year-old daughter obsessed with princesses. And if you do have a ten year old who's into that stuff, FOR THE LOVE OF GOD CANCEL YOUR NETFLIX SUBSCRIPTION BEFORE IT'S TOO LATE.