Book Review: The Santa Claus Man: The Rise and Fall of a Jazz Age Con Man 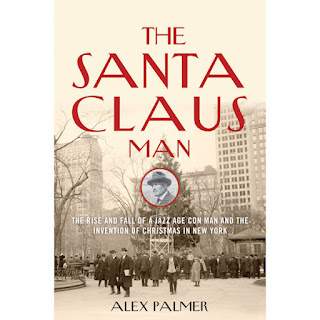 The Santa Claus Man: The Rise and Fall of a Jazz Age Con Man and the Invention of Christmas in New York
Alex Palmer, 2015

Premise: In the early 1900s, more children began to write letters to Santa, and the Post Office asked for help. Enter John Duval Gluck Jr. and his creation: The Santa Claus Association.

This was an interesting book overall, although the payoff is smaller than I would have preferred.

The book paints a complex and intriguing picture of New York in the first few decades of the twentieth century, particularly around Christmas. The specific story of Gluck and his various "charities" is only the largest thread; the book also explores early influences on the image of Santa, how various staples of Christmas (public tree-lightings, parades, etc.) started or became notable in New York City.

I actually thought the information about how children came to write to Santa in the first place and how it was affected by the spread of efficient mail service was one of the most interesting parts.

The Santa Claus Association filled a real need: the Post Office could barely handle the influx of packages as Christmas presents became more common, it certainly couldn't figure out what to do with mail to a mythical character. After a public outcry when it became known that the Dead Letter Office just destroyed Santa letters, any organization with a concrete plan to handle them was welcome to try.

Gluck started out bragging about how efficient his organization was compared to other charities, that he simply connected wealthy New Yorkers with children in need, providing wish lists to those who could fill them. By the end, however, it seems to have mostly been a money-making scheme which brought in copious donations and paid out very little.

He was also intimately involved in the rise and fall of the United States Boy Scout, a rival organization to the current Boy Scouts of America. (Fascinating reminder of the changes in American culture: the early BSA was criticized by the head of the rival org for being too religious and therefore pacifist.) Gluck refined many of his tactics for fundraising there, notably alleging that prominent figures supported the organization (without their knowledge). At the time, fundraising and publicity were fairly unregulated, and people like Gluck often took what we would consider an obscene percentage of whatever money was raised.

Probably due to the scarcity of records, the author (Gluck's great-grandnephew) is unable to provide any really startling or concrete information about many of Gluck's scams. There is a lot of circumstantial evidence, and investigations at the time determined that Gluck was a cheat and a swindler, but his various enterprises were merely shut down. Scandalous, yes, but there aren't records that show, for example, how much money was actually spent versus taken in, probably because Gluck saw the benefit of not having books that could be audited.

This was overall a good read, especially for those with less knowledge of Christmas history, but even I found some new facts to enjoy in here.