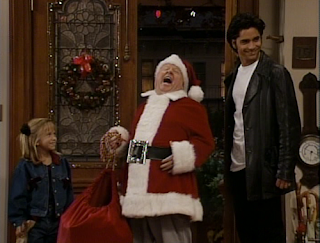 Can you sense it? Sitting there, reading this on your computer screen or your smartphone, can you sense the relief embedded in every word I type?

There's no great mystery - it's simply the sense of freedom that comes with the realization that, in all probability, I will never again find myself watching another episode of Full House in my entire life.

Of course, I've said that before. About once a week, since the early 90s, the thought has echoed through my head. Sometimes I've feared otherwise. Woken up in the dead of night in a cold sweat with the thought of an episode hanging over me. Then, after decades, I felt the weight of existential dread as I realized I'd have to watch and write up the Christmas episodes.

But with those out of the way, it should be smooth sailing here on out.

Sorry - I'm getting off track. Arrest Ye Merry Gentlemen is a holiday episode from the series's eighth and final season. And, despite the rather ominous introduction written above, it's several steps up from the others we sat through.

Oh, it's still bad. It's still a pedantic exercise in moralizing that lies to its young viewers by implying the world is bound by simple problems that can be easily solved with childish gestures and cheap sentiments. It's still obnoxious and idiotic - in short, it's still Full House. But the writing in this episode, unlike the other two, felt as though it was written by a human who understood what humor was, at least in theory. There were jokes present, not merely bits of dialogue awkwardly punctuated with a laugh track. Were the jokes good? Not really, but at least they were there. I heard them.

The plot centers on Michelle buying a gift for her father for the first time. Prior to the start of the episode, she picked out a novelty tie, though she missed the joke. She's getting ready to give it to her dad when Rebecca randomly walks in with the same thing, which she's planning to give to Joey as an actual gag gift. She watches in horror while Danny and Jesse complement the awfulness of the present.

It's already Christmas Eve, so her time is limited. She pulls Jesse aside and shows him why she's depressed, then asks him to take her out to exchange it. He's reluctant, since he's sick of dealing with shoppers in a bad mood, but she convinces him to help.

The reach the store she bought it - a joke shop that's already closing - and trick the owner (played by Mickey Rooney) into letting them in. He refuses to let them make the exchange since Michelle didn't bring her receipt, which escalates into an argument between him and Jesse. Eventually, he accuses them of trying to steal another gift, locks them in, and activates an alarm to call the police.

Let's fast forward through the BS melodrama and feigned concern. While they're waiting for the police to show up, Michelle befriends the old man, and they learn he's alone for Christmas. He eventually lets them know he's already called the police and said it was a false alarm, which makes Jesse even more annoyed, as it means he delayed them for nothing. But this show was baptized in bullshit, so of course Michelle fixes everything by convincing her uncle to let her invite the lonely old man over for Christmas Eve dinner.

The B-plot follows some adventures back home. The two young twins accidentally see DJ and Stephanie trying to help Joey squeeze into an undersized Santa suit and misinterpret it as Santa attacking their cousins. This is stupid, but... okay, anytime young kids scream that Santa's a monster, it's a little entertaining, even on this show.

It's all fine in the end, and everyone learns lessons or teaches them or is so goddamn sick of lessons they throw up on the TV (guess which category I fall in). There's a song at the end where it feels like the entire cast is too tired to even try.

For what it's worth, Rooney actually puts some effort in, and it shows. He's still saddled with weak dialogue and a weaker premise, but for some reason, he clearly cares how the show comes out. I'm not sure why he cares, but you've got to respect him for trying.
90's Comedy Episode Erin Snyder