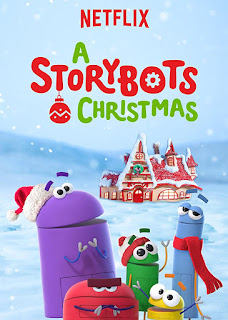 When we finished watching this new special from Netflix, we were left with a conundrum. Had we just experienced a kids show with a surprising scattering of subversive humor and references? Or a hit-and-miss parody of children's entertainment? Or a piece of tedious moralizing aimed at the very very young?

If it sounds like all those things couldn't possibly be contained in one 25-minute special, you understand why we were perplexed. We didn't hate it, but we didn't enjoy it either. We spent most of it staring at the television, heads slightly cocked to one side, saying, "Huh?"

The best I can put together without doing any research is the Storybots are animated characters from a children's series of the same name, and they answer questions from videos of young kids. They live in a place that is either another dimension or a hollow-earth world, which is connected to Earth via a series of vacuum tubes. In their own world, they're two-dimensional animation, but when they come to the surface, they become 3D CG overlaid on live footage.

The character designs for these multicolored robot-creatures are distracting. The tops of their heads aren't connected to anything and whether their mouths have flexibility seems to change moment-to-moment. Also, they're cylinders with rounded tops, which, um, brings to mind some things that children's television characters probably aren't meant to resemble.

In this special, the child's question is "What is the best gift you've ever gotten?" The Storybots start all discussing great gifts they've gotten from each other. The largest one, Bo, wanders off, suddenly worried that her friends don't like the gifts she's made them over the years. It turns out they were just building up to her gifts because she gives awesome gifts, but she's already gone off by herself.

She decides the best person to learn about gifts from is Santa himself, so she travels to the North Pole. There she meets the best running gag in the episode: an animated polar bear who can't manage to open a bottle of soda.

At Santa's workshop, she finds a crying puppet elf who tells her that Santa's left mysteriously, and the only thing that had been making him happy were these cookies from a bakery in New York. Bo sets out in pursuit.

Meanwhile, the others realize that she's missing and look all over for her. Finally, they think to track the tubes and soon follow her tracks to the North Pole, check in with the polar bear and the elf, and also head to New York.

Bo catches up with Santa (Ed Asner) at the bakery, and it turns out that he's doubting his ability as a gift-giver as well. After all, it takes a lot more effort to make high-tech gifts, and he gets less appreciation.

After drowning their sorrows in milk and cookies for a while, the other Storybots catch up to them in a park. They explain how much they love Bo's gifts, but add that the important thing is being together. Cue a surprisingly catchy song about how being together with loved ones is the greatest gift of all. After they talk about gifts showing how you care, Santa realizes he wants the kids to know he cares about them, but it's late on Christmas Eve and he doesn't know if he can make his deliveries.

The Storybots (and all the other mysterious bots from wherever it is they live) use their magic tubes to get the job done, of course.

As I tried to explain upfront, this was surprisingly funny and sweet at times and surprisingly snarky at others, but it wasn't consistent, except for being consistently weird.