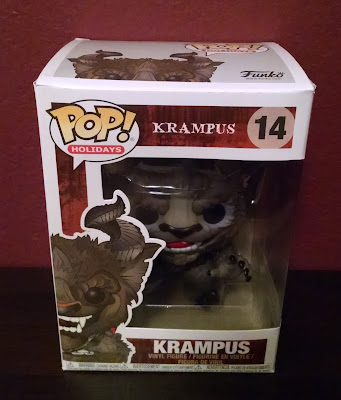 If you're not familiar with Funko's line of Pop! figures, it's probably been a while since you've stepped foot in a Hot Topic. Or Barnes & Noble. Toys R Us, Target, Gamestop, Walmart, Walgreens... these things are everywhere. Usually in large numbers, too.

These are vinyl figures, which is different than normal plastic for reasons that after fifteen years of collecting toys as an adult, I still don't remotely understand. They're stylized to look cartoonish and fairly uniform. The toy line stretches across more properties than I can count - if it is or has been part of pop culture in the past three decades, there's a very good chance it's been made as a Pop! figure (possibly with a dozen or so variants).

As a rule of thumb, I don't pick these up. There's too many to bother with, and while I like the look of them well enough, they're not really the sort of thing I go after. I made an exception when I heard they were making this one, though - I can always use more Krampus figures.

Krampus is unusual for this line - he's not directly tied to a branded property. Even the sub-line he's from (Holidays) seems to mainly be characters from Elf and other Christmas movies. But rather than base this figure on his appearance in the movie Krampus or A Christmas Horror Story, they opted to start with his classic look. The art on the back of his box references this, which was a nice detail. 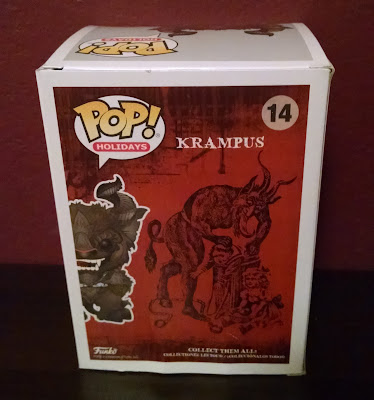 Visually, I like what they've done here. They've captured the character's essence well enough to make recognizable while turning him into something kind of cute. As I said before, this isn't a line I'm interested in diving into, but I'll admit I've been tempted by some of their other horror figures. 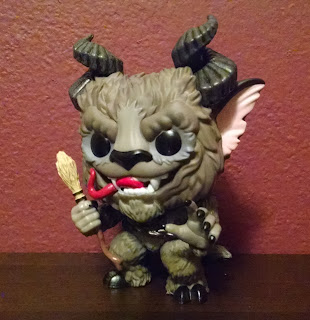 The tongue and horns looks great - I particularly like that the tongue loops away from his mouth, leaving a bit of empty space. That being said, the paint on that part of the tongue looks a little darker than on the section between his teeth (I'm assuming the extension was painted separately then attached). It's only noticeable up close, though - overall, this is a nice looking figure.

I should probably mention that this guy isn't articulated. For all intents and purposes, he's a statue, not an action figure. Again, this is baked into the premise of the line, as well as its relatively low price point. 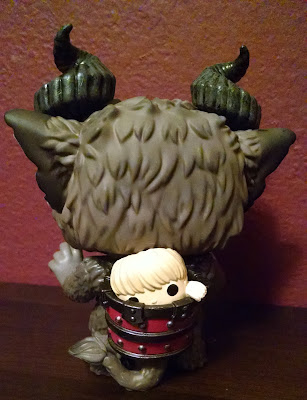 On his back, you can see a kidnapped child peaking out of Krampus's pack. Again, a nice attention to detail, not to mention a little dark humor to contrast with the style of the figure - nicely done.

Krampus stands about five inches tall, measured from cloven feet to the tops of his horns. You might find this in stores, though I wouldn't bet on it. There are so many Pop! figures these days, stumbling across any one seems unlikely. Your best bet is probably Amazon, where you should find him easily. Actually, you'll find A LOT of variations of him. They've got flocked, alternate colors, an icy version... most of those will run you a lot more than the original, though.

Or you could wait a few years. The production runs on these are staggeringly high, so there's a good chance they'll wind up binned in used toy stores for a dollar or two each before long.
Erin Snyder Krampus Toy