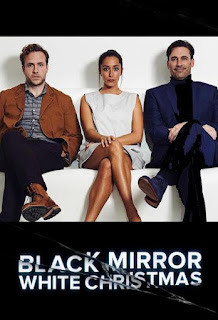 People have been telling us for years we should check out Black Mirror, a British (well, formerly British now Netflix-produced) science fiction anthology series, but we've been busy. We finally got around to at least watching the Christmas special, and we were... I don't know. Not overwhelmed, not underwhelmed. I guess we were whelmed.

The production values were certainly impressive. The writing was solid, though I didn't find this special spectacular. The holiday elements felt tacked on - I wouldn't be at all surprised if this were originally written for another purpose than altered to fit a holiday mold.

This is really three short bits tied together by a frame story about two men ostensibly living and working together in some snowbound environment. It's meant to be ambiguous at the start, but I doubt I was alone in assuming it was some sort of purgatory or hell.

And I was right. It's essentially a digital purgatory, which becomes pretty obvious quite a while before the reveal, thanks to the subject matter of the preceding stories.

We get to those stories as the two men, Matt and Joe, get ready for Christmas. More accurately, Matt's getting ready to celebrate (somewhat ironically), while Joe could clearly care less. Matt chastises Joe for being so quiet - in five years together, he's barely said a word. To get him started, Matt starts in with a dark Christmas story from his own past.

Matt used to be the ringleader for a group of men using technology to pick up women. He'd sort of act as a Cyrano de Bergerac armed with sci-fi spyware. In this future, everyone has "Z-eyes" installed that work like smart glasses.

This all goes horribly wrong when one of their members inadvertently picks up a mentally ill woman who overhears him talking to himself and thinks she's found a kindred spirit. She tricks him into drinking poison in a murder-suicide, and things snowball from there.

Oh, he picked her up at an office Christmas party, because... Christmas, I guess. With a few changes to the script, they could have met at a singles bar (or a wedding reception he was crashing, with even fewer changes).

Story two also concerns Matt; this time in his professional life. His job was working with digital copies of people made from their brainwave patterns. Why were digital copies made? To run smart homes the way the originals wanted.

This segment is mostly Matt torturing a newly created AI copy with isolation until she complies and works as a slave. This is clearly more to set up the technology, including the ability to run simulations at astronomical speeds - days flying by in seconds and that sort of thing.

Also, Christmas is mentioned once or twice for some reason.

Part three finally gets into Joe's backstory. He was involved with a woman who became pregnant but didn't want the baby. This infuriates him, leading to a fight ending with her breaking it off and "blocking" him. Remember those "Z-eyes" I mentioned earlier? There's a setting that allows people to block people from seeing you or vice versa; essentially transforming their image into a static blob. This extends to images, as well, and to offspring, which is important because she has the baby, anyway.

Joe finds out and spends years trying to stalk them with very little success. He can never see his daughter (even pictures are just a blur). Then his ex passes away unexpectedly, and the block's lifted. Finally, he looks on his daughter...

Only to discover she isn't actually his daughter. Turns out, his ex was having an affair. Joe ends up in a confrontation with his ex's father and kills him with a snowglobe. Then he walks out and drives away.

Meanwhile, the young girl is left alone. She winds up wandering into a blizzard to look for help and dies from exposure.

Oh. This all happens around Christmas for very little reason.

Matt gets Joe to confess his involvement, which is actually the point all along. TWIST: this is all happening in a digital simulation featuring a copy of Joe interacting with an 'Inceptioning' Matt. He's the expert at this sort of thing, after all, so he's agreed to get a confession in exchange for leniency for the crimes outlined back in the first story.

He's released from custody but with one big caveat - he's on a registry, so he's blocked by EVERYONE (except the police, I guess). The last we see of him, he's wandering around a holiday market looking at static outlines of people who see a red static outline of him.

He's better off than Joe's doppelganger, at least. The police officers overseeing him turn his time rate up to a year a minute and leave him alone in his personal hell listening to "I Wish it Could be Christmas Every Day" on an endlessly re-spawning radio.

There's a lot to like here. The leads are played by John Hamm and Rafe Spall, both of whom are great. Plus, there are some genuinely disturbing and intelligent scenes. The staging of the murder-suicide in the first flashback was particularly effective - it cleverly subverts sexual violence in a way that inverts normal gender assumptions.

I actually thought all the "hell" moments were good, with the exception of a rather superfluous recursive snow globe shot in the closing seconds of the special. That said, I wasn't sold on the foundations for these moments. The reasoning behind the technology was never clear. Why would everyone opt for digital eyes over less invasive smart glasses? Why copy someone's consciousness to serve as a digital overseer when a machine learning exists?

But the larger issue I had was with theme. The episode seems to trip over what it's trying to say, and (inadvertently, I hope) winds up delivering what reads like an endorsement of men's rights ideologies. The "blocking" concept, particularly since we only see it used by women to shut men out of their lives, is portrayed as unjustly cruel in the special. Arguably, everything that happened with Joe was the result of being denied information he had a right to know (i.e.: whether or not he had a daughter). It's hard not to interpret this as a defense of Joe - sure, he did bad things, but he was the puppet of a cold, uncaring world.

In fairness, this was made in 2014, right before the awfulness of men right's groups became widely known. Still, that aspect doesn't age well. Turns out, the ability to block abusers and harassers is one of the more positive aspects of social networks.
2014 Erin Snyder Horror Science Fiction Special