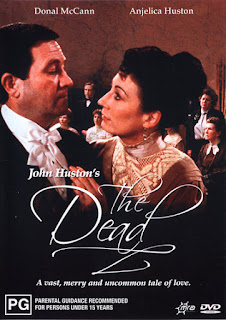 The Dead is an adaptation of a James Joyce story about an Epiphany party, which I suppose we're now annexing as part of Christmas (to be fair, January 6 would have been considered the conclusion of Christmastime when the movie was set, a fact outright stated in the film).

This is John Huston's last film before his death, and it seems to be widely beloved with a 92% Freshness rating and several honors. While this isn't unfair - the movie is well constructed and acted - it's definitely not for everyone.

For example, it definitely wasn't for me or Lindsay: we found it boring as hell.

The plot is essentially contained in the last five minutes of an hour and twenty minute long film. Until then, the entire thing takes place at a party being thrown by three women I'm assuming are sort of standing in for the three wise men. If you want to know whether this is a heartfelt ode to Irish culture or some sort of ironic mockery of tradition, you'll have to go find a Joyce scholar - I don't care enough to look it up.

People at the party eat, drink, sing, and bicker. Someone shows up drunk and makes an ass of himself and embarrasses his mother, who's something of an ass, herself. This manages to capture the essence of being at a rather boring party that goes on longer than you want it to. To Huston's credit, this seems to be exactly what he was going for: thematically, it plays into the resolution.

The last couple of minutes center around a husband and wife after they leave the party. Someone at the party sang the wife a song which impacts her deeply. Her husband questions her and discovers she'd been in love with someone before him, and that he'd died at seventeen after enduring the cold while sick to see her. The song was one he used to sing to her, and it's brought back old memories.

Nothing really happens, but the husband reflects on the weight of this, how he's never felt deeply enough about anyone to have done anything like that, how memories of the dead linger, and some stuff about it snowing in Ireland.

Did I mention that by this time I really stopped caring?

I'm assuming I'd have felt more charitable if I'd been familiar with the story. The monologues at the end are beautiful, and I'm assuming they were lifted more or less verbatim from the text. But, frankly, I didn't find it interesting to watch. This is almost certainly better suited to film students and English majors: I wouldn't recommend it to anyone else.

The holiday elements were fairly heavy, though somewhat obfuscated. The party occurs on the Feast of the Epiphany, which was likely chosen as a symbol of conclusion. I also doubt it was a coincidence that the feast celebrating three wise men was hosted by three women, but - as I said before - I'm just guessing as to the meaning. It's worth noting that the script did make sure to draw attention to the date and the holiday's meaning.

Overall, you can consider this one of those movies I respected more than I liked.