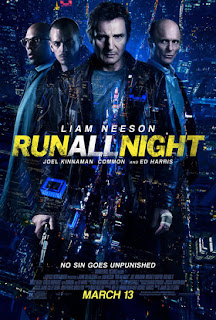 Run All Night is an action/drama vehicle for Liam Neeson. The fact that it came out last year and you haven't heard of it provides a far better overview than I could ever hope to achieve. But, in the interest of pumping the internet full of content to drive it towards self-awareness, let's have a go at this.

The movie is set in New York a little before Christmas. The majority of the story, as the title implies, plays out over a single night - probably not Christmas Eve, but who knows? This movie was vague as hell.

The main character is Jimmy, a burnt out mob enforcer played by Liam Neeson. He's a drunk, tormented by memories of the people he's killed and the mistakes he's made. His best friend is Shawn, a mob boss trying to go legitimate. Both men have a son: Jimmy's son, Michael, hates him and wants nothing to do with his father, who was absent most of his life, anyway. Shawn's wants to be successful, like his father, and gets involved with drug dealers.

Michael drives a limo for a living, and in a shockingly contrived turn of events, his clients are killed by Shawn's son, who tries to kill him to keep him quiet. Just before he can pull the trigger, Jimmy shows up and shoots Shawn's kid.

I'm actually skipping over a great deal of noise regarding Shawn not wanting to get back in drugs, a failed attempt by Jimmy to get Michael to agree to keep quiet, a local youth nicknamed "Legs" who Michael coaches in boxing videotaping the shooting, and some other complications that basically serve no purpose to the core story.

Oh! I almost forgot that, prior to getting killed, Shawn's son hires Jimmy to play Santa at a Christmas party, which falls apart, because Jimmy was drunk.

Shawn wants revenge, despite the fact he knew his kid was an ass and the psycho really got himself killed. But for some reason, he decides Jimmy has to pay. And the only way he can pay is for Michael to die before dawn.

Oh, also Michael has a family, who he sends off to safety without him, because... because...

Wait. Why the hell doesn't he go with them? I think the movie fed us a line about not running away or something, but that makes absolutely no sense in the context of what's happening. Actually, that could be said about most of the scenes and character decisions in this movie.

I guess Michael stuck with his father (who he hates) so they could have a series of misadventures where Jimmy saves Michael from mobsters, corrupt cops, cops who probably aren't corrupt, and a sociopathic professional assassin. They take a few side treks, first to Leg's low-income housing unit, then to Jimmy's father's house, where Michael learns Jimmy killed his own cousin years before.

Now that Michael learns his father is a horrible person, a fact the movie spent the first hour repeatedly telling us he already knew, he takes off to join his family in his father's old cabin, which there is absolutely, positively no way anyone, not even a sociopathic professional assassin, could find.

Meanwhile, Jimmy calls Shawn to give him one last chance to drop his vendetta against Michael, but Shawn laughs this off. What's Jimmy going to do? Go action hero, burst in, and gun down like twelve people in an extended fight sequence? Ridiculous! This just isn't that kind of a movie - they spent an hour and a half building a far too realistic tone to have a single, wounded, hungover man past his prime go Rambo and take on the mob!

So. Yeah. They Seagaled it. Jimmy goes on a rampage and systematically takes out all of Shawn's men before they have a completely original and not all boring fight in a rail yard. Yup. Never seen THAT before.

With all that taken care of, Michael is finally safe. Jimmy goes to the cabin to tell him, and they reunite. Jimmy even meets his granddaughters and Michael's wife.

The sociopathic professional assassin from earlier has tracked them down, leading to a final shoot-out where Jimmy - mortally wounded - has to find the strength to overcome a metric ton of melodrama and shoot the aforementioned assassin just in the nick of time. He dies having achieved redemption through his son, and the movie ends after a brief epilogue where Michael's getting ready for the funeral.

The fight scenes are pretty rote if you've seen many action flicks from the 70's, 80's, and 90's - there's really not much original here. Ed Harris, who plays Shawn, manages to squeeze out a few good moments in spite of the dialogue he's reciting, and Neeson's schtick is solid, as always. But there's really very little here of substance. Aside from a few moments where Harris pulls off a miracle, the emotion feels 100% fake, and the story is a twisted jumble of threads trying to disguise the fact the core concept isn't remotely sufficient to base a 2-hour movie on.

Let's talk Christmas. Like I said before, this is set around the holidays. There are Christmas decorations tossed onto most of the sets, though there's never quite as many as should probably be present. In addition, the movie makes use of CG-assisted establishing shots, as well as pans of the skyline... and all of these are notably lacking in holiday cheer.

I spent seven Christmases in New York City, and let me tell you something - when it gets to be Christmas, you damn well know it. The sky bleeds red and green in December.

The larger question, as always, is why bother? Why set the movie at Christmas in the first place?

Whenever something fixates on Christmas and occurs over the course of a single night, my instincts hone in on the Solstice: a long night punctuated with the sun's symbolic rebirth. That certainly fits this - the movie's resolution occurs in the morning, with Jimmy dying in the light. He outlasted the darkness and finally found his family again.

You know, same as parts one and two of Die Hard and Home Alone.

If you're skeptical they thought the symbolism through that far, I suppose they could have been going for the old staple of juxtaposition. Or, hell, maybe they just really wanted to play The Pogues's Fairytale of New York during the scene where Jimmy goes Super Saiyan and takes out a dozen armed men.

This isn't the worst action movie out there. Rotten Tomatoes has this around 60%, which only feels a little generous. It's occasionally tedious and somewhat pretentious, but it's watchable. I guess there's worse things that can be said for Christmas movies.

Still, there's no reason for you to watch this when In Bruges exists. That movie delivers far better drama and action than Run All Night and even finds time to deliver brilliant comedy.
2015 Action Drama Erin Snyder