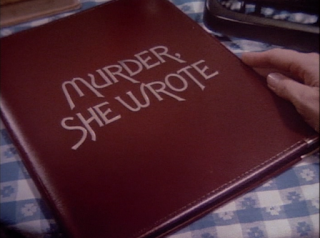 The secret of the title is half obvious and half boring. Just putting that up front.

Murder, She Wrote can sometimes be charming, and sometimes it can just be tedious. This is one of the latter. Angela Lansbury does her best to maintain unflappable enthusiasm and charm, but the story is downright dull.

We open in that deceptively peaceful Maine town, Cabot Cove, which is welcoming Charlie, a young veteran who is engaged to Beth, the daughter of a prominent family. Charlie is thrilled to be so embraced by the community, as he and his sister grew up in foster care. He has something important to tell Beth, and gives her a key to his hotel room so they can meet up later. Except they don’t.

Instead he finds a tape with a blackmail message on it, and he has dinner with Beth but doesn’t talk to her about anything important. We know that the son of Beth’s father’s business partner resents Charlie’s presence in town, but he’s a red herring.

There’s also another sketchy young man (Floyd) who runs the hardware store, a young woman who’s obsessed with him (Amy), and a young woman (Wanda) who actively seduces young men and gets despised for it by just about everybody but the sainted Jessica Fletcher (Angela Lansbury, in case you’ve never heard of the show). None of the young actors have enough screen presence to star in a Lifetime TV movie.

In any case, Beth sees Charlie meeting up with yet another mysterious woman and is heartbroken. Wanda is shot with Charlie’s gun by someone in a Santa outfit at the town Christmas party, and it’s her voice on the tape in Charlie’s car. He’s arrested.

Meantime, there’s another tedious subplot about childhood disappointment at Christmas, which seems a bit out of place from older doctor Seth. Seth manages to save Wanda’s life, and between that and receiving a very predictable present (the toy he didn’t get as a kid, naturally) regains his Christmas spirit. Not that we care.

The important part is that Beth comes to Jessica for a sympathetic ear. Jessica decides to get involved, and in 5 minutes she meets the mysterious woman (Charlie’s sister, of course), learns his secret (child from a deceased fiancé), deduces the whole rest of the mess from all the conversations she’s had up until this point, and lures the real killer and the person Wanda was trying to actually blackmail into a sting, where they are arrested.

Simple as that. Really, I don’t know why the cops bother trying to solve crimes in this town. Beth and Charlie are reunified and Beth and her family adore his little girl. Then there’s fake snow and poorly staged carol singing.

There’s no reason to track this down - there are so many better Christmas mysteries out there.
90's Episode Lindsay Mystery