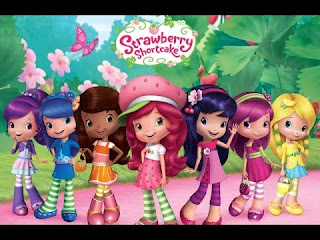 This is only a Christmas episode if you squint, but we think it counts. The characters specifically say that it’s the shortest day of the year, that everyone has different traditions to celebrate, and theirs involves gift-giving. One or two of those wouldn’t do it, but all three and we’ll give it a pass. This is despite the fact that the animation company didn’t bother to give any of the backgrounds or characters any sort of winter look.

The plot mostly follows the aforementioned gift-giving. Strawberry Shortcake and her candy-colored friends have a Secret-Santa-like tradition where they pick names out of a hat and give secret presents. They are preparing for this when a caterpillar (named, I kid you not, “Mr. Longface”) visits, and they invite him to join in.

Strawberry picks his name and sets out to find the perfect gift. Blueberry has Lemon’s name, and decides to give her a huge book about organizing books. Unfortunately, this is a terrible gift for Lemon, who owns only two other books, and she decides to make the best of it by rewrapping it for her giftee - Plum. Plum, a dancer, doesn’t need or want a book about books, so it’s rewrapped again and passed to Orange.

At this point we decided it was definitely a Christmas episode, because the book was like the old fruitcake joke. Also I looked up the cast on my phone to confirm that I was right, Plum’s voice actress is indeed Ashleigh Ball, aka Rainbow Dash. A few of the other voice actresses are in My Little Pony as well, but she’s the easiest to hear.

Anyway, Orange passes the book (secretly) to Raspberry, who gives it (secretly) back to Blueberry. Blueberry’s initially excited - what a great gift! - then she realized it’s her gift come around, and goes off to retrace what happened.

Once she pieces together the truth, she visits Strawberry and admits her confusion and sadness that no one wanted the gift she gave. Strawberry, kindly, doesn’t call her an idiot, but just suggests that she actually think about what the person receiving the gift would want. Blueberry seizes on this, and she quickly prompts a new round of less-secret, more-inspired gift giving among the friends where everyone gets something they like.

Strawberry and Mr. Longface give each other thoughtful gifts as well, and everyone learned a lesson. Or something. It’s not very much plot for a half-hour episode.

This wasn’t awful, but it had ugly CG and was fairly bland. It gets a resounding “Meh” from me.
2010 CG Fantasy Lindsay