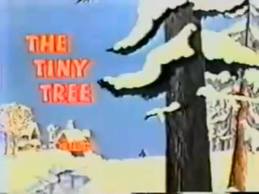 Arggh. I knew I should have just fast forwarded past this without looking. I found this on a VHS of programs recorded off of the Disney Channel when I was small.

This is one of the stupidest specials I've seen in a while. Not quite scratch-my-own-eyes-out, but that's mainly because it's short.

Okay. The Tiny Tree is a completely nonsensical special about a tree that lives in a meadow with a bunch of folksy animal friends who all have different caricatured regional accents. A little girl and her family move into the house by the meadow, and the tree and the animals make friends with her.

You have to understand that the little girl is in a wheelchair, but doesn't seem to be able to reach the wheels for some poorly-animated reason, so this amounts to a handicapped child being repeatedly kidnapped by a bunch of half-clothed, talking animals.

But it's okay, because the child loves the tree. Now, I loved trees as a child, but the way the narration keeps stressing how much the child LOVES THE TREE gets a little creepy.

Incidentally, the Tree has a face, but only whispers in a way the other animals can understand.

There are some musical numbers which vary from obnoxious to merely mediocre which serve no other purpose than to fill time. Really this could have been an annoying 5 minutes instead of a deadly tedious 20-some minutes.

Also there's a hawk... who eats berries. WHAT THE HELL?

The little girl doesn't have a name, incidentally, and no character other than being in a wheelchair. So when she falls and gets hurt trying to stop the hawk from accidentally eating his “friend” the mole, it's actually really funny. Yes, Christmas specials make me a bad person. Why do you ask?

Finally the holiday part of the plot shows up. There's a blizzard and the parents can't get to town to get the little girl's presents. The Tree decides he wants to be her Christmas Tree to make her feel better, so the animals – get this – transplant the Tree (in the snow, somehow) over close to the house and decorate it with berries and cold probably-dying fireflies and unspecified magic.

Then, THEN, Christmas magic heals the little girl. Just so that no one gives up anything, or has to experience any emotion other than oh-yay-everything-is-peachy! The writers of this thing managed to give it a plot-of-sorts with zero emotional weight or poignancy. Good job.

I don't know whether you can find this anywhere, but I don't recommend it.
70's Fantasy Lindsay Special Sucks