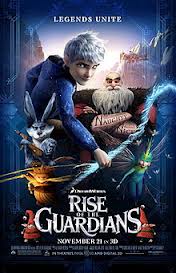 About ten years ago I wrote a novel called For Love of Children about Santa Claus, the Easter Bunny, and the Tooth Fairy teaming up to (among other things) fight the Bogeyman. I spent a lot of time trying to find an agent, but no was interested in something that out there. Three years ago I gave up and published it myself. At about the same time, Dreamworks started production on Rise of the Guardians, a movie about five characters (included the aforementioned 'big three') teaming up to fight the Bogeyman.

I've been asked by several people if they stole the idea from me. The answer is no: they announced production had started a few weeks before I released my book. So unless they had access to a time machine, they couldn't have heard about it beforehand (and, so far as I know, they still haven't). They based the movie on a series of books William Joyce was working on at the time (these started getting released last year). I keep meaning to check those out but haven't gotten around to it yet.

Essentially, Joyce and I started with very similar premises and went in different directions, but definitely hit on some eerily similar parallels on the way. I don't know how his books turned out, but I just got back from the theater, so I've got some thoughts about the movie.

The point of all that is that if you're looking for an objective review of this movie, you should probably go elsewhere. On the other hand, as someone who spent several years thinking about and writing a novel about these characters, I'm kind of qualified to discuss them.

First of all, let's address the big question: was Rise of the Guardians any good? Well, yes and no. As a Jack Frost movie, it's pretty solid. The mythology behind Frost has always been sparse, leaving them with a lot of room to work, and they put together a solid back story and concept for the character. There was certainly still room for improvement (in three hundred years it never occurred to him to try that?), but it was still probably the most interesting take on Jack Frost I've seen to date.

By most other metrics, it was a failure. The versions of Santa, the Easter Bunny, and Tooth Fairy presented were pretty original, but "original" isn't the same thing as "good." There's a lot of room for approaching characters like these from new angles, but if this is about believing in Santa Claus, you should probably be using something that at least resembles the Santa Claus children believe in. There's exactly one scene where an authentic-feeling Claus almost breaks through. It was transparently manipulative and not particularly effective, but it was still a welcome break from the zany Russian who appeared in every other sequence.

The North Pole plays a big role in the movie, too, and not in a good way. The yeti feel forced, and the elves... I actually think these are the most annoying elves I've ever seen. Scratch that: second most annoying.

Kids will probably be happy with this take on the Easter Bunny, but I'm not. Making him Australian as some sort of joke is just idiotic. And the less said about his "warren," the better.

The Tooth Fairy's portrayal wasn't much better. In a year when female characters have generally been standing out in genre films (Merida, Katniss, Black Widow, Catwoman, etc.), this felt like a huge step backward. The Tooth Fairy was the movie's only female Guardian, and she was by far the least powerful on the team and seemed entirely ineffective in most situations.

I'm sure de-powering the big three and robbing them of their histories was intentional: if they hadn't done this, Jack Frost wouldn't have been able to stand out. In effect, they knew they couldn't raise Frost or Sandman up to the level of the these icons, so they toned the icons down.

As a result, the big three are largely superfluous here. The only combatants who seem significant are Pitch, Sandman, and Jack Frost. Actually, Sandman seems to be more powerful then the rest of the Guardians combined (that's kind of the plot of the movie, in fact). Santa and the Tooth Fairy are mainly here to inspire Jack, and the Easter Bunny is mainly present to offer some competition within the team.

Again, as a Jack Frost movie, that's not an issue. But putting what are arguably the three most significant folk characters in a movie and relegating them to comic relief and supporting roles feels like a waste. In addition, the movie also fails as a superhero team-up story. Arguably, the cardinal rule of a superhero team is that every member must be essential. That's just not the case here.

Setting all that aside, as a movie it's mixed. There are some serious pacing issues throughout the first two thirds, but the last act moves at a decent clip. It oscillates between melodrama and comic relief most of the time, but occasionally finds its feet. Most of the minor characters are awful, but the villain serves as a credible threat. There are several beautiful sequences, but more that are just messy.

Like I said at the start, I'm not exactly the most objective voice out there when it comes to this thing: I've got pretty strong opinions about how this premise should have been carried out. That said, even when you pull out my issues about the premise, I think it's got quite a few failings. It does have a lot of good moments balancing those out, but in the end, the best it manages is so-so.
2012 Action Erin Snyder Fantasy Movie Superhero