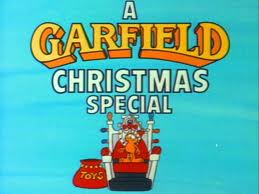 You probably know whether you like Garfield or not. It seems like the funniest idea ever when you’re a kid, or when I was a kid, anyway. This is one of a handful of specials that predate the Garfield and Friends tv show.

In the final estimation, this is a fine special. The songs aren't annoying, there are some cute moments, and while it isn't terribly funny, it isn't bad or all that boring.

The plot, such as it is, revolves around Jon taking Garfield and Odie to his parents’ house for Christmas, and a series of scenes that establish the characters’ relationships and quirks. Like It's Christmastime Again, Charlie Brown, this has the feel of a bunch of loosely connected vignettes rather than a single story. About the only plotline that is longer than two scenes is the one where Odie is making Garfield a present.

Some of the scenes almost contradict each other, too, in things like whether Jon and his brother are poking fun at their parents’ traditions or not. Jon’s grandmother is a fun character: a feisty old lady full of piss and vinegar.

The version we saw (on DVD) apparently has a slightly extended scene or two, but it didn’t drag; it came in at a trim half-hour.

There were some awkward transitions, and the animation isn’t the fanciest. I smiled at the sweet scenes and giggled a few times, though. You could do a lot worse than this for a quick holiday fix. I’m still not sure whether people can ‘hear’ Garfield, though.
80's Comedy Lindsay Special