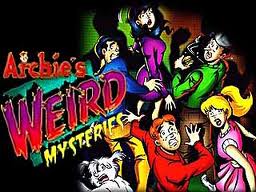 Lindsay came across a collection of Christmas cartoons called (oddly enough) "Christmas Cartoon Collection" in Toys R Us for five bucks. Each of the ten animated episodes comes from a different series. I've heard of exactly 30% of these shows.

One of the series I've never heard of is "Archie's Weird Mysteries." Apparently, it lasted for two seasons from 1999 and 2000 and is about Archie and the Riverdale gang solving Scooby-Doo style mysteries (although apparently supernatural causes were the norm). Based on the era, I'm assuming this was an attempt to cash in on the popularity of the X-Files.

This episode is from 2000. Actually, according to IMDB, it originally aired in February of that year, presumably because whoever scheduled it was as dumb as whoever produced it.

Before we continue, allow me to state the obvious: this was really, really bad. But I also had a hell of a lot of fun watching it. I honestly can't fathom why this exists, but the fact it does is kind of hilarious. That said, I really can't recommend it to anyone who's not systematically trying to see every Christmas special ever produced, so I have no compunctions about spoiling the entire goddamn thing.

The premise of this episode basically starts as a spin on phantom-of-the-opera: according to legend, the local department store burned to the ground thirty years earlier and the mall Santa vanished. Jump to the present, and the store is haunted, with the current fake Santa getting scared off by a possessed Christmas Tree. Archie, who wants a mystery for his series in the school paper, takes the job. On Christmas Eve, he's locked in. He discovers the phantom, who's raised an army of living Christmas toys using a book of spells.

Swear to God; I'm not making this shit up.

The phantom explains that he's planning to send his army out to steal Riverdale's Christmas because the town - with the exception of Archie - has grown too materialistic and has forgotten the true meaning of the holidays. Archie steals his book of spells and gets chased around by the possessed tree and the animated toys. He runs into the Christmas Phantom again and pleads for Riverdale's Christmas. The phantom offers him a deal: if Archie agrees to skip Christmas himself, Riverdale will be spared. Archie agrees, the phantom lets him keep the book of magic, and even unlocks the door.

At this point, Archie bothers to look at the book and realizes it's just a copy of A Christmas Carol. He runs into his friends and seems to promptly forget his deal not to celebrate Christmas. He ducks back into the possessed department store alone to grab the presents he forgot. While he's there, he decides to find out who the phantom is.

He finds him in the back room, tackles him, and pulls off his mask, revealing....

See, all of this was just done to screw with Archie's friends and teach them a lesson about... I don't even know. Something. Oh, and so Archie would have something to write about.

This was bizarre. Really, really bizarre. But it was so random, so utterly and completely insane, I couldn't help but enjoy the experience. You probably shouldn't bother watching this - I think I've managed to distill the essence of the thing above - but I did find it just mildly amusing enough to award it the coveted "so bad it's good label."
00's Episode Erin Snyder Fantasy Mystery So Bad It's Good