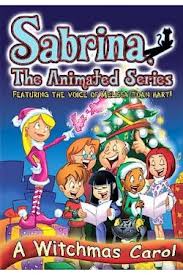 I don't believe I ever saw an episode of Sabrina: The Teenage Witch, nor do I recall ever having heard of an animated spin-off. But apparently not only does such a thing exists, it has a Christmas episode.

The plot focused on Sabrina's rivalry with a rich, stuck-up classmate. She attempts to put this character through the premise of A Christmas Carol to what I really, really wish had been hilarious effect. Ultimately, the writing and poor comprehension of the medium made the result tedious and uninspired.

Structurally, it clearly wanted to feel like a sitcom: the characters were two-dimensional, and the world was mostly constrained. The only reason simplistic characters work at all in sitcoms is that actors are able to add depth or - at the very humor - to the backdrop. Take away the nuance, and you're left with a blank slate, which is exactly what this felt like.

Using a bratty rich girl as the villain was about as lazy as you can get. The character was constructed to be unsympathetic, which almost made me sympathize with her. Likewise, the lesson the episode tried to impart felt entirely forced and wasn't remotely convincing (nor was the resolution).

The jokes were delivered in cliched one-liners and over-the-top characterizations that were utterly meaningless without live actors. Nothing was funny or interesting: just vapid and inoffensive.