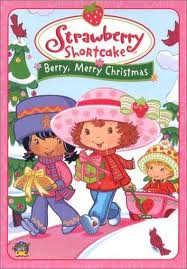 I'm a little confused how this exists. I knew that someone did a rather silly-looking reboot for Strawberry Shortcake in the early 2000s, around the same time a bunch of 80's franchises for girls got ill-fated re-imaginings. But we bought this used, and it's a VHS.

It's a good thing we bought this 50-cent used VHS tape, though, because if we hadn't, I would be unable to report to you that the tape itself is berry-scented. Just like the dolls.

Onto the actual content: surprising no one, this is pretty bad. Not “Oh God, my eyes!” bad, but just without any production values to speak of. I mean, I guess the animation isn't terrible. However, what they chose to animate is incredibly boring.

There is basically no plot to speak of, and so the characters just meander around an impressively dull world for 45 minutes. It is in fact like watching a particularly unimaginative six-year old try to plan a party. Picking out presents is a nearly insurmountable task, requiring one to sing terrible songs about it.

That's the plot, incidentally. Strawberry Shortcake has to buy her friends Christmas presents, but she sucks at doing this, and eventually goes on a little trip to the place where the stores are, and picks out gifts. Santa helps, because Strawberry's kind of hopeless. The End. Exciting, huh?

The songs are terrible: poorly written, shoved in at weird times, full of forced rhyme schemes and un-catchy tunes. It doesn't help that the voice actors don't seem to be able to sing and do their character voices at the same time, so it isn't like they're actually singing so much as shifting the pace of their speaking. The voice acting in general is odd. The vocal intonation never changes, it's consistently just high and lilting, no matter whether the character is happy or angry or sad. The transitions are also really strange. Odd CG ornaments appear and disappear, apropos of nothing, sometimes when no transition is necessary.

The moral of this story seems to be: it's nice to give presents. Also, think about what your friends are like in order to pick out good presents. You can use questions like: is your friend a pony? If not, did your friend conveniently mention that she didn't have any more plums? Maybe in that case if you think really, really hard you can think of something to get her. If all else fails, you know, you can always fall back on the classic little-kid present: make something useless. Like, say, snowballs.

Along the way we also learn that maybe a machine that's making too many candy canes shouldn't be set on high.

And that strawberries make good currency. In winter.

Although, really the lesson should have been that maybe Strawberry should have started shopping before her friends came over. Yeah, literally her friends all just wait at her house while she shops.

Erin said this was “somehow hypnotically fascinating in its utter vapidness,” and I'll have to agree. It wasn't a good piece, not at all, but it was amazing as an example of how low you can set the bar for children's programming and people will still buy it.

Needless to say, this is not recommended.
00's Episode Fantasy Lindsay Musical Sucks