American Dad: "The Most Adequate Christmas Ever" (2007) 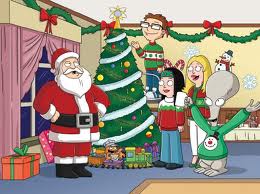 Lindsay and I picked up a DVD containing a Christmas episode of Family Guy and one of American Dad. We got it dirt cheap at a warehouse sale. We saw both and divvied them up: she reviewed "A Very Special Family Guy Freakin' Christmas", and I lost the coin toss.

Where to start? As far as I can tell, American Dad is the show Seth MacFarlane made to make Family Guy look good in contrast. I've only seen a handful of episodes, but nothing I've sat through struck me as being funny in the least. This Christmas episode was certainly no exception.

The premise sounds better than it was: Stan gets killed trying to find the perfect Christmas tree. After failing to make a case for deserving a second chance at life, he grabs a gun, breaks into Heaven, and tries to threaten God into sending him back to Earth.

In case you missed the subtle subtext, Americans are arrogant and violent.

In the hands of capable writers, this premise could conceivably have worked. But, unsurprisingly, the writers of American Dad weren't remotely up to the task. This didn't feel subversive or intelligent in the least: it barely even registered as shocking. I'm sure the producers wanted it to be jarring and leave us gasping at the idea someone would dare do something so blasphemous at Christmas, but - frankly - things like this don't surprise us anymore. South Park got picked up after a short where Jesus and Santa throw down and a handful of kids die in the crossfire: do the makers of American Dad really think a CIA agent holding a gun to God's head is going to surprise us?

With the shock value stripped away, there's really nothing left. The characters are 2-dimensional, meaning whatever pitiful lessons learned have no emotional weight behind them. The jokes - if they can even be called that - are childish and humorless.

Needless to say, this thing is a waste of your time: skip it. Apparently, it isn't the only American Dad Christmas episode, either. There are at least two more, which I suspect we'll track down eventually. Can't wait for that.
00's Comedy Episode Erin Snyder Fantasy Sucks