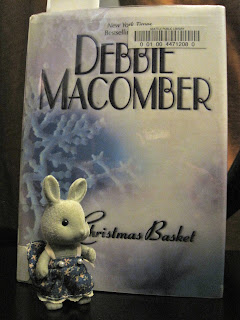 Wow. Romance is silly. I mean, anyone who says otherwise is just deluding themselves. It's not necessarily bad, but it is darn silly.

Particularly this light bit of fluff from noted romance author Debbie Macomber. Apparently Ms. Macomber writes a Christmas book every single year, so a friend suggested she'd be a good choice to spotlight for Mainlining. Why did I read this one? It was available at my local library and it won an award. Simple as that.

I flew through this book in a single evening, and most of the details have left my brain already, but for romantic fluff, it wasn't bad. Sure, every single character was a sitcom-level moron and they all deserved the stupid pits they’d dug themselves into, but it was still okay to read.

The main problems with the book are common to a lot of romance (I think, I do read romance on rare occasions, after all). There’s a crazy amount of telling rather than showing. This character says shes upset, then she says she’s conflicted, then she says she’s in love. I never really felt any of it. The romantic plotline overall was pretty by-the-numbers and dull. The main girl’s name is Nowell and her birthday is Christmas. Ugh.

What saves this book from the scrap heap is the fact that the mothers of the lovebirds are in the midst of a twenty-year feud which escalates into a sort of global-war-level of petty catfighting just for the holidays as they attempt to work together on a charity project. The mothers are both hopeless and hilarious. I was actually a little sad when they (completely unrealistically) made up by the end.

So, do I recommend you read it? Probably not, unless you’re trapped in a Barnes & Noble in a blizzard and other people took all the good sci-fi. Am I sorry I read it? Nah, it was short. Not the worst way to spend a couple hours.
00's Book Lindsay