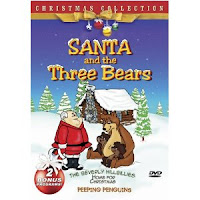 This is the second Christmas special I've seen from the 1970's that focuses on the idea of bears delaying hibernation in order to learn about Christmas, the first being 1973's "The Bear Who Slept Through Christmas."

This one is quite a bit less surreal.  While the bears can speak, they're significantly less anthropomorphic.  Living in a cave in Yellowstone Park, they're friends with the park ranger, one of only four characters to receive any real screen time.

Like a lot of specials, this is artistically impressive, while still being a complete and total failure.

The story would feel stretched at thirty minutes, making the special's hour-long running time superfluous and tedious.  A significant portion of the special is spent cycling through reused animation while music plays in the background.  In terms of actual content, this is one of the sparsest Christmas specials I've seen so far this year.

Apparently, I should consider myself lucky - according toWikipedia, there's actually a 76 minute version, which incorporates a live action segment.  I'm really, really glad Netflix doesn't have this up.

That said, this isn't without redeeming features.  The characters - particularly of the mother - are surprisingly realistic (other than the fact she's a bear, that is).  The fact she's simultaneously fed up with her kids' behavior and deeply concerned about their feelings rings true.

In addition, while it's certainly not complicated, there's something appealing about the animation used here.  It's reminiscent of old Hanna-Barbara, and it's easy to be drawn in, at least for a few minutes.

I do want to add that the special's relationship with religion is a little bizarre.  When telling the bear cubs about the origin of the holiday, the ranger describes the birth of Jesus (though I don't think he ever referred to him by name).  He explained that Christmas existed to celebrate the boy's birthday, and that gifts were still exchanged to remember the gift Jesus brought to the world (neither of which is remotely accurate; so much for educational content).

The ranger initially describes Santa as a "legend," though of course we learn better by the end.  I'm always baffled by things that attempt to integrate Jesus and Santa Claus into the same worldview (if you ask me, South Park accomplished this far better than anything else I've ever seen, certainly better than this special).

While there was definitely some love and care put into this production, it just doesn't justify the length.  You could fit this tale comfortably into a five minute short without it feeling rushed: by the time you've reached the end of the hour special, you're certainly wishing they had.

If you really want to put yourself through that, both Netflix and Hulu have this up for instant viewing.
70's Erin Snyder Movie Religious Sucks