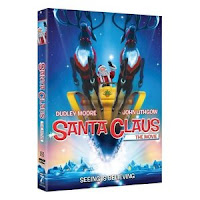 As something of a Santa Claus aficionado, this is a movie that fascinates me on an academic level, which is a good thing because it's not a very good movie otherwise.

This movie is very clearly emulating (if not outright copying) Blitzen's Superman.  Apologies - I've just remembered that Donner directed the 1978 Superman movie (Blitzen was at one point in negotiations, but that fell through).  At any rate, there's no denying the parallels: the first third of each movie focus on an otherwise unrelated origin story, both film attempt to transport their respective mythologies into a relatively realistic setting, and in each the villain is Lex Luthor.

The only real difference between the two productions is that Superman was a good movie.
However, Lindsay is explaining why Santa Claus was crap, and I see no reason to repeat the same points.  As such, I'd like to discuss why it was almost good.

And that, of course, brings us back around to our title character, good old Saint Nick.  Or it would, if they'd incorporated the actual origin of the character's name.  Instead, they opted to "borrow" from several Rankin/Bass specials and give him the toymaker origin.

Overall, I have mixed feelings about these sequences.  On one hand, the opening sequence where he and his wife travel to a village to give out presents is probably the best in the film.  The problems are introduced when he's granted immortality and the title, "Santa Claus."  I appreciate that children aren't going to have any problem with this, but it severely cheapens the premise.  When the origin of the name and red robes is ignored, it dishonors the mythology it's supposed to be celebrating.

I have no problem with Christmas specials that paint over this aspect of the character, but that's because those are working in a different tradition (that of L. Frank Baum's "Life and Adventures of Santa Claus," to be specific).  This attempts to treat Santa like a realistic character and insert him into history.  When someone does this, I expect them to at least contend with some of the questions and issues that idea raises.

The character's origin doesn't make this a bad movie, and changing wouldn't have made it good (to do that, they'd have to overhall everything about the elves, the villain, and the plot).  But this is indicative of the overall failed philosophy of the movie: to treat Santa as myth until it becomes hard, then retreat into the safety of children's entertainment.

This is cowardly.  And, worse, it's stupid.  There's nothing in the mythology of Santa Claus more ridiculous or absurd than that in comics or other works of fantasy, and I'd like to see someone take the character seriously.

Someone should really write a book or something.