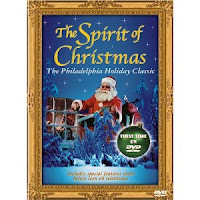 This goes beyond "so bad it's good" into the land of "so horrible it's great." This half-hour, made-for-TV special is brought to us by Bell Telephone, a fact that's reiterated by the Bell representative, who introduces the two segments while standing in front of a brigade of grinning phone operators.

The first half is described as telling the tale of how Twas the Night Before Christmas was written. Turns out, this guy had an idea on Christmas Eve and wrote a poem in his study using paper and ink.

This riveting tale is interrupted by the poem brought to life. When I say "brought to life," I'm lying outright, because there's no similarity whatsoever between the cold, dead marionettes on screen and anything alive. In fact, in spite of their bright paint, these resemble the walking dead, both in appearance and in movement. When Santa tilts his head to one side and looks through those cold, empty eyes, you can sense his hunger for the flesh of the living.

The horror, however, keeps it interesting. For all its faults, this segment never gets dull.

Now, let me tell you about part two. The Nativity. The host describes this as "The Greatest Story Ever Told" at least three times, presumably as in an attempt to convince the viewer of this truth, despite everything they're seeing to the contrary.

Credit where it's due, the puppets are quite a bit better this time: someone spent some effort making these, and it shows. These are beautiful works of art. Pity they're used in such a boring production.

Granted, the birth of Christ isn't exactly an action-packed extravaganza, but there's no reason it has to be boring. Certainly not THIS boring. Even so, I got a twisted joy out of watching this draw on. It's like watching paint dry in really interesting ways.

If you're looking for a well put together, intelligent, heartwarming pair of stories, forget about it. However, as an unintentional comedy and bizarre look into the days when calls were connected manually, this might be worth a viewing.