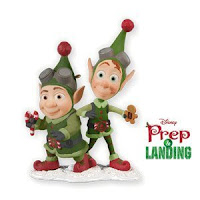 I'm sure Lindsay's writing something about this, too, but I'm going to say my piece all the same.

Prep & Landing is a new addition to the holidays, but it's already claimed a spot.  I know most of you have never seen this - have probably never heard of it - but that has to change.  This is one of the best Christmas specials ever produced.  It can hold its own with just about anything out there.

First, let me give you some background.  A few years back, Disney "bought" Pixar.  The word "bought" is in quotes for the simple reason that, as part of the deal, Disney more or less handed the reins of their entire corporation over to Pixar's leaders.  In other words, Disney paid Pixar a large amount of money to take control of Disney.

This is, incidentally, why Disney suddenly started producing films that don't suck again.  It also left John Lasseter in the position to green light things like Prep & Landing, a half hour Christmas special about elves who help prepare for Santa's arrival and the landing of his sleigh.

When I put it like that, it kind of sounds dull.  But... here's the thing.   These elves are about 6 inches tall.  And they could kill you.  They could snap your neck like a twig.

They won't - they're Christmas elves, and as such, they're benevolent beings.  They wouldn't want to hurt you.  But, if they did, they could.  You see, Prep & Landing is a dangerous job, and the elves assigned to it are as badass as they come.  We're talking seasonal black ops here.  Sure, they spread Christmas cheer and all that, but they do it with ruthless efficiency and little regard for their own well being.

I haven't gotten into the testosterone and fairy-dust fueled reindeer.  Unlike the elves, they probably do want to hurt you.  Well, maybe not Santa's team, but... it turns out Dasher has a cousin who you do NOT want to get angry.

Prep & Landing is a Christmas special for James Bond.  That's not to say it isn't warm: it is.  It will warm your heart and make you love the holidays.  But it's a hell of a ride to Christmas cheer.

Incidentally, the music is handled by Michael Giacchino, who scored The Incredibles, Star Trek, Up, and dozens of other films.  If anyone from Disney is reading, what I really want for Christmas is for you to start selling the soundtrack.

Disney hasn't released this on DVD yet, but it shows up online around the holidays.  In addition, there's a new seven minute short you can find, called "Operation Secret Santa."  Minute per minute, it's just as good.  Supposedly, there's a half hour sequel in the works for next year.  There aren't a lot of movies coming out next year I'm looking forward to as much as that TV special.
00's Action CG Comedy Erin Snyder Fantasy Highly Recommended Special Spy