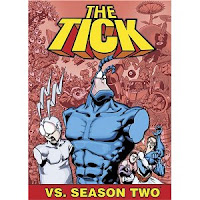 Ultimately, "The Tick Loves Santa!" is on par with most episodes of the animated series, which is to say it's absolutely phenomenal.

The story introduces Multiple Santa, a bank robber who steals a Santa suit from someone on the corner, gets electrocuted, then develops the power to multiply himself.  The Tick, of course, is unable to bring himself to strike the clones out of fear that he might inadvertently be hitting the "real Santa."

Along with brilliantly conceived action sequences featuring dozens of evil Santas (a surprisingly disturbing image, it turns out), this episode offers some of the best one-liners ever to grace holiday programming (personally, I'm partial to the villain's boast, "The streets will run red with Santas").  On top of that, this offers an ingenious and original portrayal of Saint Nick and his elves I'd rather not spoil.

This is easily one of the best Christmas episodes out there.  If you haven't seen it, do yourself a favor and track it down.  This time of year, I'll bet you can find it on YouTube easily enough.  If you want an official copy, I suggest picking up "The Tick Vs. Season 2

," which is a great collection (although there's a episode omitted due to rights issues).
90's Action Comedy Episode Erin Snyder Highly Recommended Superhero