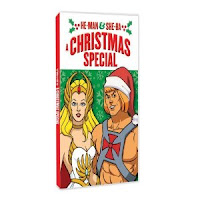 Growing up, I always hated He-Man.  Everything about the show repulsed me; I'm not entirely sure why.  I certainly liked other bad cartoons, but something about He-Man just felt wrong.

Well, I'm older now, and am no longer disturbed by the program.  Actually, I really enjoyed the 2002 reboot

The point is, The He-Man & She-Ra Christmas Special wasn't part of my childhood.  The first time I saw it was at a Christmas party a few years back.  The second was last night on Hulu.

Placed firmly in the "so bad it's good camp," I have to admit this is really entertaining.  I mean, yeah, it's awful.  Really, really awful.  But it's also hilarious.

The story - to the extent the term applies - follows the misadventures of Orco, as he accidentally teleports a few children from Earth to Eternia.  The kids tell everyone about Christmas, which pisses off Horde-Prime, who seems to be the overlord of an evil empire.

Horde-Prime sicks Skeletor and Hordak after the kids, promising rewards to whichever of them captures the children.  If I were ruler of a galactic space empire, I'd make it policy never to pit two generals against each other like that: they just end up fighting amongst themselves until the good guys win.

In addition to those two, a group of giant, transforming robots called the "Monstoids" get involved for no apparent reason.  The kids spend at least a few minutes in everyone's surprisingly merciful clutches, while He-Man and She-Ra race to the rescue, battling incredibly lame obstacles on the way.

In the end, the children get hover-belts and a one-way trip back to Earth, Prince Adam dresses like Santa, and Skeletor learns the true meaning of Christmas.  No, really.

There's nothing good about this special, at least not in the traditional definition of the word, but you need to see it.  Everyone needs to see He-Man and She-Ra comforting Skeletor because he's freaking out from all the Christmas cheer.

For what it's worth, I totally know how he felt.