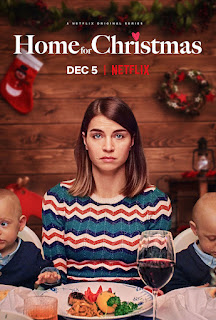 Hjem til Jul is a Netflix-produced Norwegian semi-romantic Christmas comedy/drama series. As is becoming more and more common, it's produced as a solid block of Christmas entertainment, almost like they surgically removed a holiday episode, regrew it into a full organism, and discarded the rest.

Alternatively, you could think of this as a movie that got chopped into episode-length pieces. That might be more accurate in some ways: Hjem til Jul's seasons are six episodes, each approximately 30-minutes long, so at plus-or-minus three hours, it's still within movie-length (though admittedly twice as long as you'd typically find within this genre).
Be aware said movie would definitely be rated R. The humor is at times crass and explicit, and while the vast majority of the dialogue is in Norwegian, speakers occasionally switch to English to drop an F-bomb.
This review is going to cover the first season - I'll do the second at a later time. Also, I guess there's a third coming next year, so I'm sure we'll get to that eventually. All that being said, before I type another word, I'm issuing a...
SPOILER WARNING.
As is typical, I'm going to talk about the resolution, and - as is less typical - you should care. Because this is pretty damn good. Really damn good, in fact. And not in the ways these things are typically good (at least not in America - I've got no clue what other Norwegian comedies are like). So, if you're in the market for a delightful, surprising, thoughtful comedy series, this would be a good time to stop reading and start watching.
At the start, I described this as a semi-romantic comedy, and I should probably explain what I mean by that. The premise, as laid out in the first episode, centers on its protagonist trying to quickly find a boyfriend to bring to Christmas dinner to cover for lying to her family about being in a relationship. And wherever you're thinking this is going from that launching point, rest assured you're completely and utterly wrong.
This isn't a conventional rom-com, she doesn't end up with her true love (or with anyone, at least by the end of season one), and it's more interested in deconstructing the social assumption that everyone should want to be in a monogamous relationship than it is in conforming to the template.
And yet it's still kind of sweet and romantic. There's a sense of whimsy in its exploration of dating, sex, love, experimentation, and - on the other end of the spectrum - anger, jealousy, and heartbreak. It finds humor, joy, and sadness in every aspect of love, and that's certainly not limited to romantic love.
Johanne, the protagonist, is a nurse with a large family, friends and coworkers, patients she builds deep connections with, an ex she seems to still have feelings for, and - over the course of the series - numerous romantic entanglements. She spends the first half of the series focused on the latter, but over time becomes far more concerned with her friends, family, and patients.
The series knows what the genre's conventions are, and it seems to delight in subverting them. There's a meet-cute early on that Johanne pursues only to discover a seemingly fateful encounter doesn't necessarily equate to true love. Likewise, I thought I was clever noting when other characters alluded to her favorite movie, Love Actually, only to learn... yeah, sharing an appreciation for a film isn't necessarily a sign someone's "the one." Hell, decades of marriage aren't always enough, as she learns when she discovers her parents - whose relationship formed the foundation of her conception of love - aren't doing so well as a pair.
It's a cool, fun show. It leans more towards comedy than drama, but when it shifts gears, it doesn't pull punches. It features one of the more believable TV breakups I can think of, when her one semi-successful romance takes a turn. This is good television.
Even my one criticism isn't actually a criticism. At the end of the season, I found I still didn't feel like I knew that much about Johanne. The series never really tells you what she wants or who she is beyond how she interacts with those close to her. But even this feels deliberate: the point is, she doesn't really have the answers to these questions, either. At the start of the season, she implies that she's searching for those answers, and her growth came not so much from finding them but from finding peace with being unsure.
So then. Let's talk Christmas. The series uses the holiday in a few different ways. First, Johanne's journey is largely about confronting the question of who she wants with her for the holidays, who belongs in her family. And her answer is quite a bit more inclusive than she'd realized - her love isn't limited to a single person, and if it were, that person probably wouldn't be a boyfriend.
There's also sort of a running meta-commentary on the genre. The series references Love Actually by name and the entire genre by implication. You can't deconstruct something without approaching it.
But even beyond that, this show seems interested in the mystique of Christmas. The sense of magic and beauty created by the lights and decoration, the feeling of history and wonder. And, of course, humor: this isn't above a good malfunctioning lights gag.
We started watching this on a whim and got quite a bit more than we expected. I'll be interested to see where this goes in future seasons.
One last thing. Despite being Norwegian, there's a Community reference in one episode, and... look, I was already loving the series, but that is one a hell of a good sign.
2019 Comedy Drama Erin Snyder Highly Recommended Season