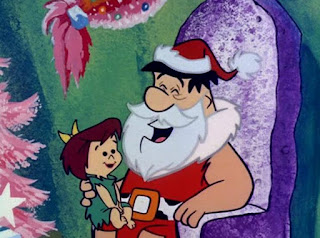 Until this started, it didn't occur to me that it's probably been at least thirty years since I actually watched an episode of The Flintstones in its entirety. Honestly, I'd be happy going another thirty before repeating the experience.

The show isn't bad, so much as dated. Half the joke was in the premise, which lacks the same impact if you've grown up thinking of it as an institution. For me, The Flintstones have always existed, so the knowledge it was somewhat revolutionary in its day feels academic. It also doesn't help that the central conceit of merging the stone age with cutting-edge designs is sort of lost now that those designs look antiquated themselves.

I wonder if the next generation of kids look at The Simpsons the same way. Speaking of which, it's probably not an accident the premise for The Simpson's pilot mirrors this episode.

The plot of the sole Flintstones Christmas episode centers on Fred taking a second job in a department store to earn extra money to buy his family better gifts. "Plot" is perhaps a generous term: it's really more a jumping-off point to tell a series of loosely connected stories. In the first, Fred is given various tasks around the store, which he fumbles until his boss fires him. His termination sticks all of five seconds until he's rehired to take on the role of the store Santa, which transitions into a bizarre series of musical numbers, brief sequences, and even a segment relying on still images and voice-over (there's a story reason for Fred to be reading a children's book, but it honestly feels like they ran out of money) showing him excelling at and loving the job. There's absolutely no tension through all of this, and only the occasional attempt at humor.

Finally, on Christmas Eve he gets a visit from two of Santa's elves, who take him to the North Pole to meet with the big man, who's sick with a cold. Flintstone gets enlisted as a replacement and spends the evening delivering gifts. Cold or no, Santa returns the favor by delivering Fred's gifts to him after he left them in the sleigh.

Whether any of this qualifies as good depends on how much of a curve you're grading on. This series was important and ahead of its time, but still quite a ways behind our time. References that would have been timely are now dated, and the humor - in this episode at least - just doesn't connect anymore. Okay - most of the humor. There were a couple gags in the background art that still elicited a smile or two.

Still, I can't really recommend this on its own merits. It's an interesting enough artifact of its time that left a lasting impact on pop culture, but it wasn't as much fun as I'd hoped.