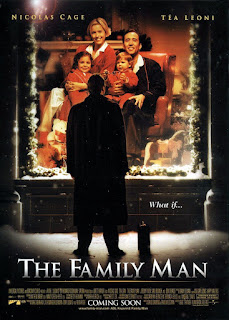 I have no recollection of this movie ever existing, and honestly that surprises me. It's not so much that this deserves to be remembered - aside from a few solid performances, a couple decent moments, and a score from Danny Elfman, it's got very little going for it - but it's kind of amazing a Christmas movie starring Nicholas Cage, Téa Leoni, and Don Cheadle could gross more that 100 million dollars then just get swallowed up and forgotten. It makes a little more sense when we enter the director into the equation: this was made by Brett Ratner, whose reputation as Hollywood's least interesting filmmaker has been overshadowed by numerous accusations of sexual assault and harassment.

The Family Man is the story of Jack (Nicholas Cage), a successful businessman who broke up with Kate (Téa Leoni) years before in a formulaic prologue set in an airport. Jack thinks he's happy, and he seems to have everything. That's until Christmas Eve, when he witnesses Don Cheadle pull a gun on a bodega owner during a dispute over a lottery ticket. Jack deescalates the situation and tries to convince Cheadle's character to get help, only for Cheadle to imply Jack's the one who needs help.

Turns out Cheadle is playing an angel or God or Santa or something. The gun was a test, and Jack passed, so he wakes the next morning to find himself in an alternate timeline where he never broke up with Kate. Instead, they're married in a New Jersey suburb with two kids. Instead of running a multibillion-dollar company, Jack works in his father-in-law's tire store.

So, yeah, we're doing yet another Reverse-It's a Wonderful Life. Because of course we are.

Jack freaks out and runs away on Christmas. Eventually, he finds Don Cheadle again, who explains the basics and sends him back to his new home. His family is briefly upset that he ran off for six hours on Christmas, but they basically forget this by the next day.

The movie then enters a holding pattern of showing Jack act horribly, get scolded, then sort of improve as a human, while those around him just kind of shrug off behavior that should probably be prompting discussions of institutionalization.

It's difficult to summarize because the movie throws a lot of details and subplots at you in the hope you won't notice the vast, vast majority are never resolved, don't build meaningful relationships, and don't really have a causal connection to Jack's character development.

For example, his father-in-law is a fairly over-the-top character, and we're informed he had a heart attack in that timeline that caused Jack and Kate to move to the suburbs. But the character never actually develops a relationship with this version of Jack or even spends an appreciable amount of time with him onscreen. He's important to the backstory, but only as a prop.

Then there's a subplot centered around a neighbor who wants to start up an affair with Jack, an idea he's extremely receptive to, since he doesn't consider his marriage "real." He discusses the idea with a friend (which is odd, since he doesn't consider that friendship real, either), but is told not to pursue it, since it would be a betrayal of Kate. The subplot just evaporates after that, having never materialized into anything dramatic, funny, or of consequence. The only real takeaway from the interaction is it prompts Jack's friend to drop a piece of information that does seem to leave an impression: that others are jealous of him for having Kate.

A variation of this surfaces again towards the end, when Jack - now happy to have Kate and his family - pursues his old job in an attempt to get the best of both worlds. He manages to get his foot in the door, but this creates more problems: Kate doesn't want to move to the city. They argue, and he brings up the fact they could have a life people envy. Kate points out people already envy what they have. The thing is, as far as I can tell, this is the argument that sinks in and makes Jack finally appreciate having a wife and family, even if it means giving up wealth and prestige. And, uh, is the theme of this movie actually that the reason a "simple" life is great is that others will still covet it? Jack's motivations never seem to fully be decoupled from a fixation on societal ideals of success, and that feels astonishingly hollow, as if the movie's premise that a loving family is itself worthwhile is being adapted by someone who doesn't believe it.

It's worth noting the entire sequence of him trying to get his job back could be cut from the movie without impacting the narrative. It's one of the better sections - him using knowledge and skills from his other life to get a leg up in the tangent timeline is one of only two truly interesting twists in an otherwise by-the-numbers story - but the only thing it does structurally is refocus Jack's motivation away from Kate and towards societal expectations. And, again, the movie never seems to imply living according to those expectations is a problem.

Regardless of his reasons, Jack becomes accustomed to his new life, which of course cues Don Cheadle to show up and return him to the real world. Which is kind of a problem because of the movie's other interesting twist, a character I've glossed over so far: his daughter, Annie.

Unlike every other character, Annie picks up on the fact her dad isn't acting right and comes to the correct (well, mostly correct) conclusion that Jack isn't her real father. I guess she's more into classic SF than classic Christmas movies, because she assumes Pod People rather than It's a Wonderful Life. This plays out in a surprisingly fun discussion where he offers assurances her Jack is fine and will be returning to her. From a plot standpoint, this provides him with someone willing to answer his dumbest questions (where he works, where the baby goes to daycare, etc.). More importantly, though, it provides the movie with its sole compelling emotional relationship.

This movie utterly fails to sell Jack and Kate as a believable or interesting couple. Jack comes off as far too irritable, self-centered, and immature to convince you Kate (or any other adult) would be at all interested in him. But those same childish traits make for a compelling connection with an actual child. This works. I should note this forms an extremely small portion of the movie. Annie is a minor character at best - the bulk of the story centers on Jack and Kate - but the relationship with her dad plays out as a touching arc that actually feels resolved...

About a minute before she's blinked out of existence.

I mean, that's what's happening here, right? I suppose you could charitably infer the alternate Earth continues on after Jack is Christmas-magicked home, but there's nothing really implying that. I half expected the movie to pull a "fate" twist where we saw her and her brother born a few years later in the prime timeline, but that's not what happens.

Instead, the movie has Jack track down Kate in his world. She's far more successful in this timeline, as well, and she's getting ready to move to Paris. Jack follows her to the airport, where they have an interaction mirroring the movie's prologue. It's best described as an attempt to mimic resonance - it looks the same, but doesn't manage to integrate character arcs or meaningful growth. The movie opened with Jack refusing to sacrifice his ambitions to stay with her; it ends with Jack apparently convincing Kate to sacrifice hers. That's not growth: it's just him winning.

To be fair, we don't actually know conclusively what happens. She agrees to stay and have a coffee with him, and the credits roll over them sitting together and talking. Presumably, they get back together, but who knows?

And honestly, who cares? Like I said, I never bought them as a couple, particularly not as soulmates meant to be together across the infinite gulf of the multiverse. Kate doesn't really have much of a personality outside from what Téa Leoni (to her credit) is able to inject in a role that feels as though it's been written as an afterthought.

Meanwhile, Jack doesn't make sense on any level. That's as much an issue with tone as anything else. The character is written and played as sort of an over-the-top comedic part, the sort of role that feels like it might have been offered to Jim Carrey first (if so, he was wise to turn it down). The problem is that Ratner doesn't film it that way. The movie is ultimately played straight, with a mostly somber tone and realistic look. Maybe it's emulating It's a Wonderful Life in more ways than just borrowing the premise. Or maybe Brett Ratner is just that bad at directing.

Actually, there's quite a bit of evidence for the "Ratner sucks" hypothesis. The movie has a tendency of having characters deliver long-winded speeches or rants - sometimes to be comical, other times to outline themes - while the character they're speaking to just stares at them blankly. It's bad writing, sure, but the framing for some of these scenes is just baffling. Lindsay and I spent a lot of this movie just laughing through the serious bits.

There are a few elements in this movie we liked. Téa Leoni and Don Cheadle do good work, though their efforts feel largely wasted. The script does contain a few genuinely solid concepts that differentiate it from other movies with nearly identical premises. But the good stuff either feels out of place or it's undermined by the ending. And it's nowhere near enough to make up for the uninspired directing, the tedious dialogue, or the inflated runtime.

This thing's been forgotten for a reason. Unless you're a Nicholas Cage completist, there's no reason to sit through this one when you could rewatch It's a Wonderful Life instead.