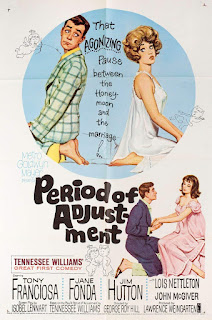 The bare premise of this film - two couples in crisis nearly separate on Christmas Eve but finally reconcile - could be a Hallmark movie. In practice, it's something much more unusual and uneven.

The movie is based on a play by Tennesee Williams. A bit of research tells me that he wrote it as a "serious comedy," partially in response to criticism that his works were too dark. It's been a while since I've studied any of his plays, but the man isn't exactly known for happy endings, and it shows here. These are deeply unhappy people, each with their own neuroses, and it seems unlikely that these "happy-ending" reconciliations are for the long term.

The movie opens with a montage without dialogue showing the whirlwind romance of a nurse (Isabel) and one of the young veterans under her care (George). She realizes that she has made a terrible mistake when a hearse (a "great car" according to George) appears as their honeymoon vehicle, and things just get worse from there. They have a fight while eating at a shady roadside diner, and they end up at a tiny, terrible motel at 2am. She gets soaked on the way in, which is one of the first instances I noticed of a strange habit of this movie.

Now that you hate George for the way he constantly minimizes his new bride's sensible concerns and is generally an ass, meet the second couple.

Ralph and Dorothea "Dottie" Bates have been married for five years and have a young son. We quickly learn that Ralph is also an ass to his wife, primarily about her parents and their four-year-old son owning a doll. They are fighting because the night before he got drunk at a party and said a lot of rude things to her father, who is also his boss. He says he's going to apologize, but instead doubles down and quits his job. During the fight that follows, their son almost seriously injures himself after Ralph throws the boy's doll into the fire. Dorothea declares that they're through, and he goes home alone, which is when George and Isabel show up.

So at this point, the writing shifts. You can feel it; all the action starts to take place in Ralph's house and the characters explain things that the audience already knows. The characters don't completely change, but the extreme behavior of the beginning (mostly) isn't repeated in favor of more realistic arguments and emotions.

I said, "Oh! this must be where the play starts!"

Erin replied, "Then why did they spend 20 minutes making us hate these people?"

That, I don't have an answer for.

George drops Isabel off and drives away. She thinks she's been abandoned; Ralph is visibly tempted by the lovely girl dropped in his lap, but verbally maintains that George will be back, and eventually, he is. So George and Ralph are old army buddies, and George is hoping that Ralph will join him in starting a ranch in Texas. That's what he wants to talk about all the time, but Ralph keeps bringing it back to their marital problems. Isabel shows off some of her own character flaws by demanding to call her parents, promising she doesn't want to talk about their problems, and then scream-crying inconsolably like a toddler on the phone to "Daddy." It's another of those moments that is supposed to be funny and just makes you think that these people all need professional therapy.

After lots of back and forth, yelling and crying and making up and yelling some more, Ralph and George have a conversation when they think Isabel can't hear them. George has a tremor, a nervous disorder, and it's heavily implied that he struggles with impotence. Ralph points out that George has a serious case of needing to seem like an untouchable, unemotional, macho brute, and that's not who he actually is. (According to Ralph, anyway.) If he's willing to show Isabel some vulnerability, they might be okay.

While this is settling, Dorothea's parents show up, after being tipped off that Ralph is trying to sell his house, and by implication, their daughter's things. They try to take possession of all sorts of gifts they had given to "her, not him." The ensuing argument draws in a police officer and the whole crew go to settle this before a judge. Remember that this is late Christmas Eve and just suspend your disbelief for a minute. From the cast list, it looks like this was settled in the play by just the officer without moving offsite.

On Isabel's insistence, Dorothea is called down as well, and she tells her parents that they've way overstepped, and any financial or property questions between her and her husband will be worked out in the divorce. The two couples then agree to drive back to Ralph and Dorothea's house (in George's hearse) to pick up their son's Christmas gifts.

On the way, Ralph tries to admit to Dorothea that he married her for her (father's) money, but she confesses that she knew that all along - she married him because as a "homely" girl, she didn't think she could do better. He explains that he couldn't stand working for her father, but he grew to love her (after she had plastic surgery and dental work that he recommended!) and doesn't really want them to separate. She doesn't believe him.

George and Isabel can overhear this conversation, and the bleakness of the other couple living together for years with their marriage built on lies and deception weighs on them. When they arrive at the house, Dorothea finds her Christmas gift from Ralph, and then she decides she does believe that he loves her, and suddenly she's on board with the Texas ranch idea.

They go to bed together, after making up the pull-out couch for George and Isabel. For their part, they're struggling, but trying to reach out to each other as the movie ends.

And the music tries its best to convince you that they lived happily ever after.

Really. One couple made up of two extremely immature people with deeply clashing attitudes and another with two people who are relying only on surface elements for their reconciliation (her cosmetic treatments and his gift). They're going to travel to another state and start a difficult, unpredictable business together. Really.

The attitudes of all four characters play like a parody of the worst aspects of heterosexuality, and the fact that they all stay together in the end... let's point out that it's appropriate that it's shot more like a horror movie than a romance.

To be fair, the film is trying - it's trying to be about two men who lay aside their pride and deal with their own issues in order to rescue their relationships, but it's hard to give much credit today to the tiny scraps of consideration that are treated as momentous events by the two women.

In the end, this movie is almost weird enough to be worth watching because the actors are all pros giving it their all. Almost, but not really.