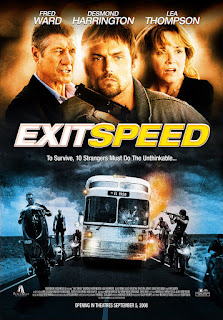 Exit Speed is a low-budget action/suspense film from 2008. I can't find much information about how or why it was made, but I'm guessing it was never meant for more than a video and/or streaming release. It's also worth noting a bus features heavily on the movie's poster, leading me to wonder if the title's inclusion of the word "speed" might have been an Asylum-style knock-off. Granted, 14 years is a hell of a gap, but I honestly can't think of a better explanation for the title.

The movie's premise centers around a group of people trying to travel through Texas by bus on Christmas Eve. Things go awry pretty much from the start, when they cross paths with... sigh... a nomadic bike gang. They get in an accident, resulting in the death of a biker, resulting in a brief chase, a crash, and a siege set in a junkyard. It's the junkyard siege that makes up the bulk of the movie.

The protagonists are something of an odd assortment of character personalities and abilities. There's an electrician who only speaks Spanish (a language improbably not shared by any of the other survivors), a middle-aged cancer survivor who's taken up marathon running, a live-action role-playing archer who basically turns into Hawkeye once she's finally able to get over her aversion to the idea of shooting at people (she keeps saying she's a vegan, which I'm guessing the writer was confusing with being a pacifist), a generic leading man with a complex past, a disgraced high school coach, a couple (one of whom actually has some knowledge of the nomadic bikers trying to kill them), and - the closest the movie has to a main character - Meredith, an army deserter on the run from the military police.

There are a handful of other people on the bus, including a driver, but they don't reach the junkyard alive. Once there, it's more or less what you'd expect: the bad guys are closing in, the good guys are fighting amongst themselves, and so on and so forth. The electrician spends most of the movie building a working potato gun while everyone else ignores him, because they don't speak Spanish or understand complex concepts like metal tubes + explosives = firearms.

The former coach is the only one with a gun most of the movie, and - despite being a horrible shot - he refuses to relinquish it to Meredith, the resident badass. Meredith is pretty badly injured at the start, too.

The cancer survivor - played by Lea Thompson - is tasked with getting out and finding help. She's tracked by a woman on a motorcycle wielding a katana, and they fight in a construction site. Thompson gets the upper hand, immobilizes her attacker with barbed wire, then suffocates her with plastic.

So... was this just set during the holidays to justify an homage to Black Christmas? Very possibly.

She then randomly winds up at a compound where a couple bikers have captured the officer chasing Meredith. The officer, incidentally, is played by Fred Ward, the other actor I recognized. She rescues him and they take his car back to the junkyard to help out in the final battle. The movie resolves relatively happily, with most of the likable characters surviving. Meredith even breaks out of the hospital, after Fred Ward looks the other way.

The villains never get a single line of audible dialogue, so they're not really characters in any meaningful sense of the word. We're told they never retreat, they're sadistic, and we see them behave both cruelly and erratically. The bad guys are of course diverse to sidestep accusations of racism, though thematically you still run into all the usual implications there. While they aren't any *specific* group of people, they're explicitly described as animals - the movie quite literally uses that word - who it's okay to kill.

Maybe they intended that line to be interpreted as ironic or disturbing, but if so they failed to convey it. It comes across as a surface-level insinuation that some kinds of people just don't deserve to live. I don't care what genre you're working in: that's a pretty awful theme to stick in your movie.

I'm guessing this portrayal of the villains - as unknowable, monstrous killers - was intended as an homage to Assault on Precinct 13. Probably not the best idea, all things considered: the fact this is also made on a low budget makes it feel like it's competing with Carpenter, and they are hilariously out of their league. This should really be trying to compete with direct-to-TV shlock.

If you set aside the problematic aspects, the rest is... I mean, it's a low-budget action flick, so it's still bad, but there's some good stuff in here, as well. I like that the gender balance is realistic. The makeup on the blood effects is solid. The cast is fine. At least one death is pretty shocking. It's not awful.

Still, it's no better than you'd expect from mediocre television from the era that somehow has an R rating. Not exactly a ringing endorsement.

Let's talk Christmas. Or rather, let's try to, because there's not much to work with. It's explicitly set on Christmas Eve, and a few of the characters have kids they want to live to see (Lea Thompson's character yells that she has kids as a way of apologizing to the woman she's suffocating - I think this was supposed to be impactful, but it was really just kind of silly). As I said earlier, I'm pretty sure that sequence was a reference to Black Christmas, and it's the most concrete connection to the holidays I could find.

Sure, there's a bit of the usual juxtaposition between the season and the horror - that's sprinkled throughout. And there are quite a few reminders (Santa hat here, presents there). Some music on occasion. But it's not like the junkyard is decorated or anything, so Christmas comes off almost as an afterthought.

They definitely missed an opportunity to connect the siege with Home Alone. I mean, come on: that should have been obvious.

Ultimately, setting this on Christmas Eve feels more like a gimmick than anything substantial.

This wasn't good, but I wouldn't expect good given the budget and premise. I wouldn't recommend this to anyone, but I can't really bring myself to hate it, either. It's fine for what it is, but what it is really isn't anything anyone needs to spend their time on.