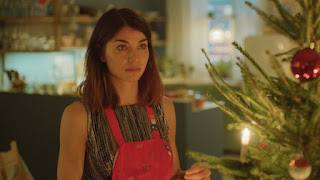 In a lot of ways, the second season of Hjem til Jul (Home for Christmas, in English), feels more like the sequel to a movie than a continuing television series, despite technically picking up the instant the first season ended. To be fair, season 1 ended on a cliffhanger with Johanne answering the door and smiling as she sees... someone... who surprises her.

That someone, it turns out, isn't someone she knows but is instead a flower delivery person carrying 100 roses, the origins of which form something of a mystery through the season. More immediately, she later encounters a coworker and the two date for a year, the story of which is presented over the course of the first episode. The relationship is nice at first, but by next Christmas, they've grown distant.

Meanwhile, Johanne's parents are having their own issues, and it appears they'll spend Christmas apart, leaving the family without a spot to gather and celebrate. Johanne refuses to concede the holidays, so she declares she'll host the annual family dinner. The season follows her as she struggles with her own fears of being alone, her uncertainty about whether she's ready to start another relationship (or perhaps rekindle an old one), and her struggles with friends, family, and neighbors.

Thematically, the second season is more focused on isolation and questions about why we form connections. Nothing this season felt as deep or subversive as the first season, but that's not entirely a bad thing. The first season had some interesting questions and objections to the romantic comedy genre, but I'm not sure it would have been as satisfying to retread the same ground.

This season ended more conventionally, with Johanne starting a more serious relationship with Jonas, a significantly younger love interest from season one and the purchaser of the aforementioned roses. It feels like the resolution of a conventional romantic comedy, and yet...

The series makes it clear they get together in part because of those roses. Not because she was moved by them, but because of the underlying fairytale narrative the mystery implies. And also because her family wanted her to be with someone who makes her happy. And because she's scared of being alone.

The ending feels triumphant in the moment, but it also leaves open the question of whether these are good reasons or not. It's an interesting jumping-off point for season 3, assuming that materializes as planned.

All of this is ultimately kind of besides the point, though. Story and theme - even when done well - are secondary considerations in this genre. What's far more important is the second season loses none of the show's charm. The characters are as likeable - maybe more so, since I feel like I'm actually getting time to know some of them.

In short, the show remains great. It's thoughtful, touching, funny Christmas fare that perfectly balances cynicism humor with sincere emotion. If you've already seen season one, by all means give this a try. And if you haven't seen season one, well... start there obviously.