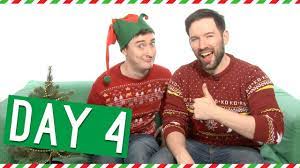 In the words of Troy Barnes, "Video games for two straight weeks, that's what Christmas is for."

One tradition I've enjoyed for the last few years is hosted by two YouTube channels about video games. During most of the year, Outside Xbox and Outside Xtra create silly list videos, play games with humorous commentary, play tabletop RPGs, occasionally indulge in something resembling industry news/analysis, and generally engage in shenanigans for viewers' entertainment.

In December, the hosts challenge each other to accomplish various in-game tasks, some of which are relatively straightforward (e.g., race to a specific point in an open-world game), but many of which involve things the games in question were never meant to do (e.g., win a wrestling match in Animal Crossing). Each challenge won confers points, and each channel annually names a Christmas champion.

They are all a tremendous amount of fun, although many of the challenges' connection to the holiday begins and ends with the festive sweaters worn in the intro. Many, but not all.

Here is a selection of the more seasonal escapades to check out:

This short challenge (Andy must shoot eight deer in five minutes in a western-themed action game) is a great introduction to the group's style and humor. Make sure to stay for the ironic conclusion.

Luke and Ellen race to be the fastest at taming a deer and riding it to a specific point. This one is even zanier, from the mildly risque jokes in the intro to some hilarious stealth mishaps and increasingly punch-drunk banter.

In this challenge, Jane attempts a Home Alone-inspired assassination mission dressed as Santa. Because it's Hitman, she can't find the costume just lying around; she must locate and knock out Santa first. Features a brief discussion of how good The Christmas Chronicles is and several Christmas miracles.

Andy is asked to drive a festive bus to a cathedral in the challengingly realistic Bus Simulator. Features some lessons in European architecture and the reason Mike doesn't want a monument with a big piece of cheese.

Being trapped in Zoom windows doesn't stop the festivities, and neither does the then-imminent demise of the servers hosting this multiplayer survival game based on the iconic horror film. Mike is challenged with finding items that might be good gifts and dropping them off on beds or fireplaces without being killed by Jason. A shortage of items that can be carried and dropped causes a high level of difficulty for "young Santa."

There is a lot more fun to be had, especially as you get to know the hosts' personalities. All of 2020's Outside Xtra challenges feature Zoom calls from "Santa," and there are also several years of video-game-themed charades, but I'll let you decide what to watch next. You don't need to be productive! It's Christmas!