Book Review: In a Holidaze 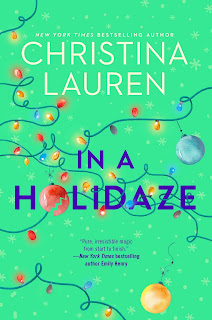 In a Holidaze
Christina Lauren, 2020

I saw this listed in a few places as THE holiday romance novel of 2020, so I decided to see what all the fuss was about. And ... it was pretty good. Easily as good as a surprisingly high quality made-for-tv movie, maybe a bit better.

The premise is classic: Maelyn Jones is trapped in a holiday time loop until she can fix her life. But the execution is not only charming, it's surprisingly thoughtful.

For her entire life, Maelyn and her parents have been getting together for the holidays with a chosen family consisting of her parents' closest friends from college and their assorted partners and kids. Since she was a teenager, she's had a crush on Andrew, one of said kids. Unfortunately, when the book opens, she's just had an unsatisfying drunken makeout session with Andrew's brother Theo. (Maelyn and Theo/Andrew aren't related at all, but I was very confused at the beginning until I figured out they aren't cousins; their parents are just close friends who spend Christmas together.)

The rest of the holiday goes poorly, ending with a car accident on the way to her family's flight home. At this point, Maelyn wakes up on the plane before Christmas has even started. It takes her a couple loops to figure out that the time loop is real and that it might have something to do with the fact that she made a wish to know what would make her happy right before the first loop.

Complicating factors include not just the crush on Andrew, but the fact that the couple who owns the holiday cabin wants to sell it, throwing the continued existence of this little chosen family into chaos. Maelyn tries to fix things by making a perfect holiday, only to cause another loop by making herself and everyone else miserable when she's too insistent on their traditions.

Finally she works through it by not just acting on her crush, but also deciding to leave the job she hates, and helping change traditions in a way that allows her (and Andrew and Theo with her) to be more than the "kids" they used to be.

She ultimately tells Andrew about the first loop, where she was so depressed about not having the courage to tell Andrew she liked him that she made out with his brother. He's upset (to perhaps an unreasonable degree), and for a while she thinks that she's ruined her chance with him.

However, this was something I appreciated - breaking the loop isn't about getting the guy (although they do make up and have a happy ending), it's about taking responsibility for her own life and happiness.

The book also gets minor bonus points for some decently handled representation that better make the transition if/when this gets its movie deal: One of the other couples in the group is gay (although there is a running background joke that one of them is acting weird because he's insecure about getting old). They have two adopted kids, one of whom is autistic, and that's acknowledged as part of her personality, but it's not a problem or a source of drama.

Overall, the writing is funny and the characters are appealing. The book is enjoyably light and fluffy, with just enough emotional weight to keep it from being too superficial. Quick warning for scifi/fantasy fans though, there's never any explanation or further information about the time loops, which is part of why it feels so much like a movie.