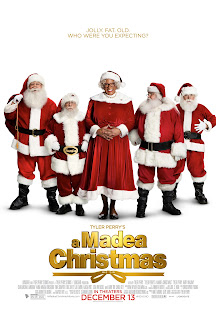 This review definitely needs to start with an aside:

What Tyler Perry, the creator and actor behind Madea, managed to accomplish is nothing short of awe-inspiring. He created a series of plays, films, and television shows that appealed to grossly under-represented audiences, and as a result, he's become one of the most successful producers in entertainment. His personal story is inspiring.

The fact I felt I needed to open with all of that isn't a great sign. God, I wanted this movie to surprise me. I went in knowing that Perry's work has never appealed to critics, but I really, really wanted to be able to offer a dissenting opinion.

No such luck - aside from a handful of good jokes and one or two compelling dramatic beats, this was an awful movie.

The film opens with Madea working in a department store along with her great-niece, Eileen. This segment is basically a prolonged excuse for Perry to ad-lib Madea farcically interacting with customers. The jokes didn't land for me at all, but I suppose your mileage could vary.

After she's fired, Madea gets talked into accompanying Eileen on a road trip to surprise Eileen's daughter, Lacey, for Christmas. They're also (briefly) accompanied by Lacey's ex from high school, who's driving down to negotiate a supposedly philanthropic donation from an anonymous corporation to the town. The ominous paperwork alone is more than sufficient to telegraph there's trouble brewing.

Blatant foreshadowing aside, this segment at least connects the A and B plots. Don't get used to this, however - this will more or less be the last time they interact until the end awkwardly tries to tie everything together.

The A plot surprisingly has little to do with Lacey's ex, the Christmas celebration, or the evil corporation. Likewise, it isn't concerned with Lacey's job as a schoolteacher or the gifted boy being tormented by his classmates and his own father (that would be the C plot, for those keeping track). The C plot actually does interact with the B plot, insofar as Bailey (the aforementioned kid)'s father also overreacts to the inevitable discovery that the evil corporation making the donation is the same one operating a dam that's preventing the town's farms from making ends meet.

But we're about an hour ahead of ourselves here, and all of that is peripheral to what the movie's actually about.

So, Lacey - a black woman - recently eloped with Conner - a white guy - without telling her mom, who's shown up out of the blue along with Madea. Making matters worse, Conner's parents arrive, as well. How long can Lacey maintain the lie to keep from disappointing her judgmental mother? (Cue laugh track; rethink life decisions that caused us to place this in our Netflix queue.)

Did I mention Larry the Cable Guy plays Conner's dad? Well, let's ignore that, because we haven't even touched on the D plot yet.

Conner is a smart kid who never learned to stand up for himself, particularly when it comes to his childhood bully, Tanner. Naturally, Tanner is Bailey's dad, and he's got no patience for all of Conner's schooling in science, nor is he interested in hearing about the modified crop Conner's working on that could help them grow corn with less water.

Also, Conner's such a beta-male, he tries milking a bull. That doesn't really impact the plot one way or another, but I feel like it tells you a lot about this movie.

Ultimately, all of these threads (with the exception of Conner not being masculine enough) connect back to Lacey, which would be a good thing if they actually interacted. But while events are happening concurrently, they're rarely discussed in the same scenes. For example, Tanner gets Lacey fired from her job, then Lacey goes home and interacts with her mother. The movie doesn't even imply that the fallout from her professional career imploding compounds with her personal drama; it's as though they filmed this before determining what order everything would occur.

Let's back up a bit and delve into the details of Lacey's firing and the surrounding storyline. On top of playing out like a separate story, it has its own theme. And that theme is - wait for it - keeping Christ in Christmas.

The evil corporation, aided by Lacey's ex, tricked the town into signing a contract that would make the town Christmas celebration secular in nature. When all of this comes to light, Tanner forces the mayor to fire Lacey.

Let's review: a public schoolteacher is fired for unintentionally connecting the town with a donor who requires them to not promote religion at a public event (unlike in school, where there's a giant wooden cross displayed in class, and the children are taught about Jesus). In case the Jewish coding wasn't already obvious, the evil corporation is called, "Sheldon Construction."

I would like to congratulate Tyler Perry for winning the Mainlining Christmas award for the Worst Implementation of "Christ in Christmas" Bullshit we have ever seen. This isn't remotely how anything works.

But all this is pushed to the back burner so we can focus on Eileen finally learning the truth. Actually, there's a lot of "truth-learning," since we also find out that Eileen's been lying to Lacey about why she has so many issues with white people. All this is happening on Christmas Eve, and everyone tries (and fails) to convince Eileen to set aside her anti-white prejudices and join her family. Instead, she decides to walk to town and catch a bus back to the city.

Meanwhile, the B plot finally gets referenced, when Lacey tells Conner that it was Tanner who got her fired. Furious, Conner heads to his truck, planning to drive to Tanner's and finally kick his ass. Larry the Cable Guy comes along for the ride.

Cut back to Eileen walking along the road. She sees an overturned truck which has caught fire and runs over to help the man trapped inside. It's Tanner! She pulls him to safety, just before the truck explodes and--

No, I didn't skip anything. We're never shown the accident where the truck flips over or given any context.

Tanner is bruised and in shock, limping away from the wreck while Eileen helps him. Then Conner pulls over, tells him to get away from his mother-in-law, and proceeds to punch him in the face. This is... it's all in view of the burning wreckage of Tanner's truck. It's clear that Tanner's hurt and confused. But Conner's blinded by rage and feels like he's protecting his wife. Once he's let Tanner know who the REAL alpha dog is, he yells at Eileen and tells her to get in his truck. Then they drive off, leaving Tanner on the side of the road beside his burning truck on Christmas Eve.

And whatever you're waiting for... it's not coming. The scene I just described is intended to represent a culmination in Conner's arc. Not only is there no comeuppance, Tanner shows up a scene later to apologize for getting Lacey fired, to thank Eileen for saving him, and to give them all a pie for Christmas.

I would like stop once more, this time to congratulate Tyler Perry on winning the Mainlining Christmas award for Worst Christmas Plot Resolution we've ever seen.

The next day, Lacey salvages the festival by running on stage and thanking Sheldon Construction for pledging four times as much money as they actually promised, agreeing to release significantly more water from their dam, and agreeing to let the town include religious elements in the party. We're supposed to believe that saying this is enough to tie the corporation's hands, and everything's fine. Queue Bailey to start lip-syncing and roll credits.

Yeah. Not the experience I was hoping for.

That said, synopsizing both undersells and oversells certain elements. Structurally, this movie was a mess - I think that comes through. But that doesn't mean every line was awful. One of the odder aspects of this movie was that there were some really good moments sprinkled throughout. There's a sequence culminating in Madea using Christmas lights to bind a bratty kid to the wooden cross I mentioned earlier that's outright hilarious. Likewise, there are some genuinely funny moments, including some - I'm astonished to admit - coming from Larry the Cable Guy.

Then there's the theme of the A plot. The theme to the B plot is utter garbage, but the A plot's is harder to summarize. If anything, I might call it tragic in hindsight. The movie seems to be primarily addressing older, more conservative members of a predominantly black audience, and it's asking them to consider their own prejudices. Much like The Big Sick several years later, A Madea Christmas tells a story where an interracial couple is embraced by white in-laws but shunned by minorities.

In this movie, part of this involved having the white parents still be a little racist (or at the very least politically incorrect). But the ultimate conclusion was that they were good people deep down, and that America - particularly white America - was evolving. It was saying that, despite a racist past and lingering problems, white people as a whole deserve the benefit of the doubt.

I think it was a fine sentiment in 2013 when the movie came out, but it's worth noting Perry was wrong. Conner's parents were reminiscent of Rosanne (I'd even go so far as to wonder if his name was an allusion), and it's hard to imagine them voting for Hillary.

Overall, this was an extremely badly made film. I haven't even touched on the editing, which is about as bad as theatrically released movies get. But despite all of that, it did deliver a handful of solid moments, effective gags, and decent drama. Plus, most of the cast did good work (with the exception of the title character).