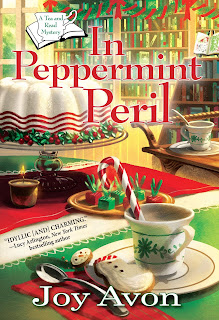 I almost didn’t write a review for this book, because I sort of felt bad. Unless it’s a new pseudonym (completely possible) this is the first book by a new author. And it’s not horrible, it’s just sort of broken. It’s a mishmash of mystery tropes that doesn’t recognize why some work together and others don’t.

It’s a holiday mystery that has little to do with the holiday. It has Agatha Christie elements but only sometimes. It has many, many side elements that read like references to previous books (that don’t exist). Worst of all, it’s a cozy mystery with a boring main character.

Cozy mysteries live and die by their leads. Almost always female, commonly bakers or small business owners, most modern cozy leads have romantic plots with happy endings or they have husbands who endorse their part-time mystery solving. Not every mystery lead has to be a winner - usually you can get away with a semi-generic self-insert-y sort of character if the writing is fun and brisk.

The lead here, Callie, is a tour guide visiting her old hometown for the holidays. While she’s there, she helps her great aunt with her book-themed tea/pastry shop. (Why does she have the skills for this? Unexplained. Why does she have a little dog that follows her everywhere, including into food prep areas and other people’s houses, despite the fact that she travels and can’t keep it? Lampshaded poorly.) She helps with the spread for a party at this fancy house where she knew people growing up. There’s going to be a will-reading, and one character is trying to pressure some other into proposing to her daughter, and Callie has the hots for the deputy sheriff, and there’s a random murder, and....

It’s just messy. There are elements of half a dozen different styles and tones of stories here, but the book doesn’t focus enough on any of them. For example, there’s an awkward cooking scene stuck in because cooking cozy mysteries are really popular, I guess? Callie’s character isn’t established in a way that makes her sleuthing make sense (either by connecting her more to the involved characters or having a history with detective work), much less justifies why anyone goes along with answering her numerous nosy questions (she used to live here, but has few connections with the current town).

Is it Christmassy? Sort of. It’s the excuse for Callie being in town (if you think she’s going back to her successful adult job at the end, you’ve never seen a Hallmark Christmas movie). There’s a lot of talk of family and a subplot around the deputy’s nephews celebrating Christmas. There’s some ice skating and decorating. Still, it’s all set dressing. The mystery plot, thin as it is, includes some papers hidden in a snowbank, but that’s not necessary for the rest of it to work.

It’s not terribly written, but the structure is not great. It doesn’t help that the entire book feels like prologue - like the author is setting up the series that she really wants to write because she didn’t have enough confidence to just jump in. It’s possible that the series will find its feet, but I won't be there to find out.
Book Lindsay Mystery